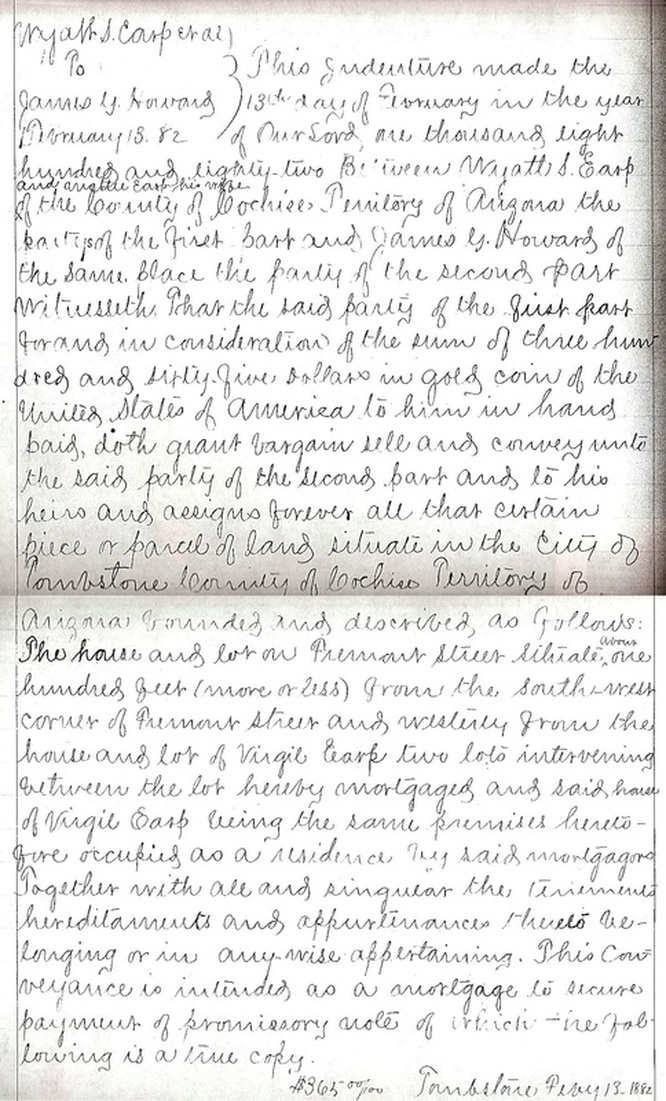 Wyatt S. Earp et al To James G. Howard February 13.[sic] 82
This indenture made the 13th day of February in the year of Our Lord one thousand eight hundred and eighty-two [b]Between Wyatt S. Earp and Mattie Earp his wife of the County of Cochise Territory of Arizona the partys of the first part and James G. Howard of the same place[meaning James Howard also lived in Tombstone] the party of the second part Witnesseth, T[t]hat the said party of the first part for and in consideration of the sum of three hundre-dred and sixty-five dollars in gold coin of the United States of American to him in hand paid, doth grant bargain sell and convey unto the said party of the second part and to his heirs and assigns forever all that certain piece or parcel of land situate[d] in the City of Tombstone County of Cochise Territory of Arizona bounded and described as follows:

The house and lot on Fremont Street situate[d] one hundred feet(more of less) from the southwest corner of Fremont Street and westerly from the house and lot of Virgil Earp two lots intervening between the lot herby mortgaged and said house of Virgil Earp[.]  b[B]eing the same premises hereto-fore occupied as a residence by said mortgagors.[mortgagees are Wyatt and Mattie and clearly Wyatt is mortgaging Wyatt’s house, not Virgil’s. ] Together with all and singular the tenements[?] hereditaments [a hereditament is any kind of property which can be inhereited] and appurtenances [a legal right or privilege attached to a property and inherited with it] thereto be-longing or in anywise appertaining.[the porch covering on the front of Wyatt’s home served as an appurtenance to the home itself]This conveyance is intended as a mortgage to secure payment of the promissory note of which the following is a true copy.
$365.00[no cents] Feby 13_1882
Three months after date without grace I promise to pay in Gold coin of the United States of America to J.G.  Howard or order the sum of three hundred dollars with interest thereon at the rate of Two per cent per month from date until paid. Value received
Wyatt S. Earp
And these presents shall be void if such pay-ment be made according to the tenor and effect thereof; but in case [of] default be made in the payment of the principal or interest as in said promissory note provided, then the said party of the second part[James G. Howard] his executors administrators and assigns are hereby empowered to see the said premises with all and every of[sic] the appurtenances or any part thereof in the manner presc[r]ibed by law: and out of the money arising from such sale to retain said principal and interest together with the costs and charges of making such sale and –per cent for attorneys fees: And the over-plus if any there be shall be paid by the party making such sale on demand to the said partys of the first part has hereunto set their hands and seals the day and year first above written.

Territory of Arizona
County of Cochise


On this day 18th day of February a.d. one thousand eight hundred and eighty-two before me B.L. Peel a notary Public in and for said County of Cochise, personally appeared Wyatt S. Earp whose name is subscribed to the foregoing instrument as a party thereto personally known to me to be the person who is described in and who executed the said foregoing instrument as a party thereto who duly ack-nowledged to me that he executed the same freely and voluntarily and for the uses and purposes therein mentioned.
In witness whereof I have hereto set my hand and affixed my Official seal the day and year in this certificate first above within.

Seal                    B.L. Peel
Notary Public Cachise County Arizona Territory
Territory of Arizona)
County of Cochise)
On this 13th day of February A.D. 1882. Before me B.L. Peel a notary public in and for the said County of Cochise personally appeared Mattie Earp the wife of Wyatt Earp whose name is sus[b?] to the foregoing in-strument as a party thereto personally knonwn to me to be the person whose name is subscribed in and who executed the foregoing instrument as a party thereto. That I made her acquainted[acquaintance] with the  contents of such in-strument and she acknowledged to me in an examination apart from and without the hearing of her husband that she executed the same freely and voluntarily without fear or compulsion or undue influence of her husband and that she does not wish  to retract the execution of the same[.] In witness whereof I have hereunto set my hand and affixed my official seal the day and year in this certificate first above written

Back to Wyatt Earp Home Site