“Plenty of money in those days. You could see it hanging on the bushes.” –Billy Ohnesorgen. 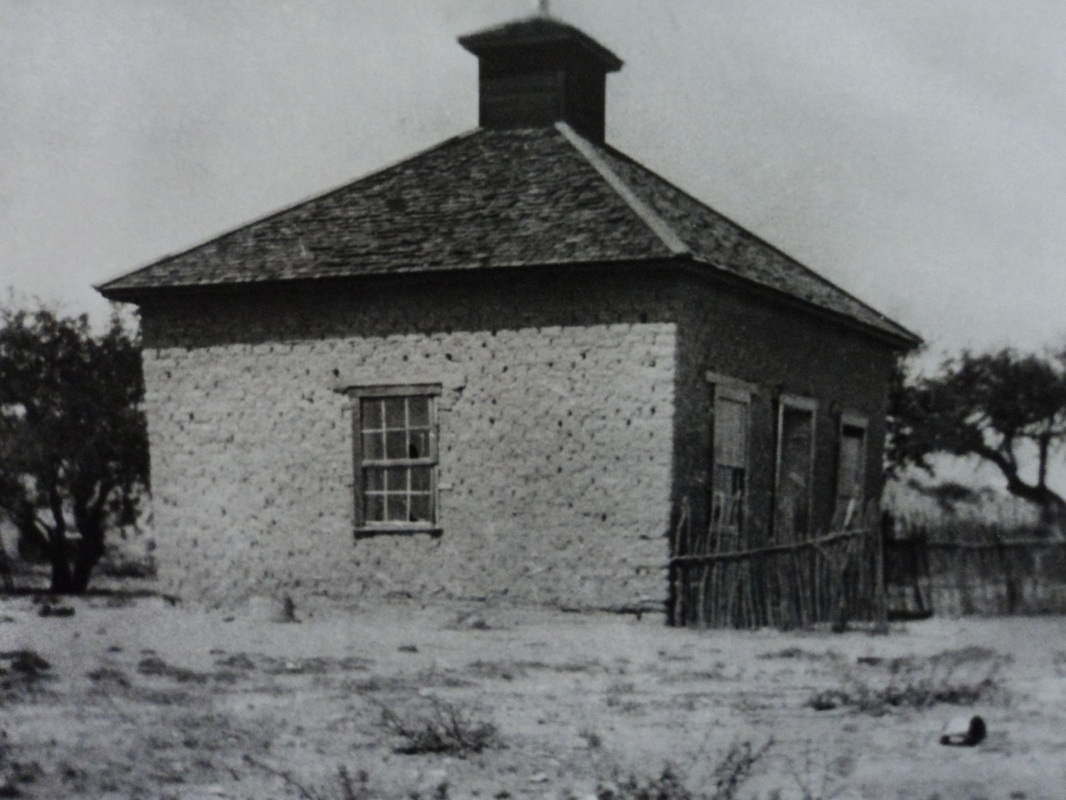 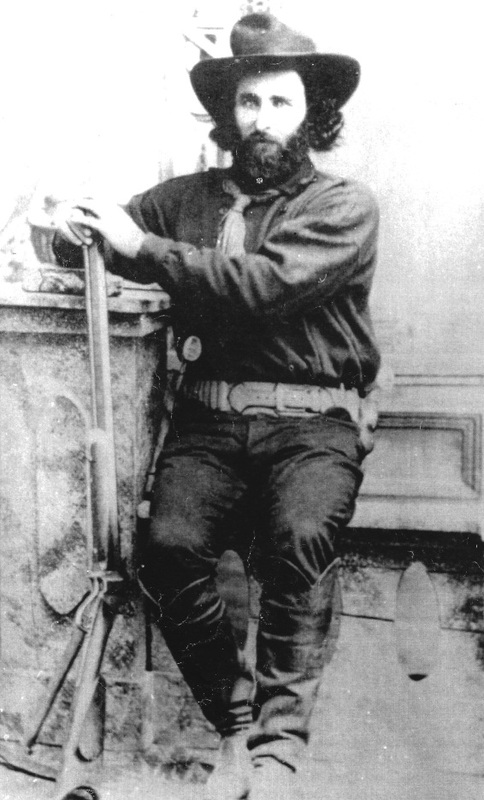 Tombstone discoverer Ed Schieffelin, copy photo from the collections of John D. Rose.
Gird echoed Billy Ohnesorgen’s report on Indian troubles in the area. After leaving Tucson, the trio arrived at “Pantano, or at least the place that since has been named Pantano…At this point was an old stage station, showing with bullet-marks and with other signs the sieges it had stood against the Indians. From here on we knew that we were in hostile Indian Country.” Gird noted the precautions that he took as they headed toward Tres Alamos. “…I insisted on putting out fires, and, in addition, I got up before daylight every morning and scouted the high points around the camp until daylight…From Pantano on, our route was by the old stage-road. I recall how Al and myself suffered from the crossing of this windswept ridge. Before noon of the same day the San Pedro river was crossed at Onasogins, [Billy Ohnesorgen’s] which was an old stage-station.” The day before reaching Ohnesorgen’s the trio made a grim discovery. “Having, the day before, passed rather recently-made graves of two persons that had been killed by the Indians, I deemed it even more prudent to take even more precaution against surprises…”
In the area of Tres Alamos they left the stage road to avoid inquiries, and pushed up the eastern side of the San Pedro, passing the area where their discoveries would soon cause William Drew to open Drew’s Station. From there they continued to traverse a wilderness that would soon be home to Contention City, setting up camp where Fairbank would later be located.  Gird continues, “The morning after breaking camp at Fairbanks [contemporary accounts use both Fairbank and Fairbanks] with visions of the freshly made graves in my mind, I kept my rifle loaded for quick action, instead of removing the cartridges, which was our custom. On starting I placed my gun in the wagon with the butt on the foot-board. A heavy jolt while crossing a steep wash bounced the gun off the foot-board, and the hammer striking the double trees discharged the ball, which passed under my right arm, through my coat, vest and shirt, but fortunately for me, merely grazing the skin. Ed was greatly frightened, but Al, who was riding ahead, took it as a matter of course with his usual sang-froid.”
Al Schieffelin upper left, and Richard Gird upper right. These two, along with Ed Schieffelin, reached great discoveries and success following their trek to Tombstone. This adventure included an errant gun shot that could have ended in tragedy.  From the collections of John D. Rose.
JOHN CLUM’S SAN PEDRO VISIT TO DUNBAR’S 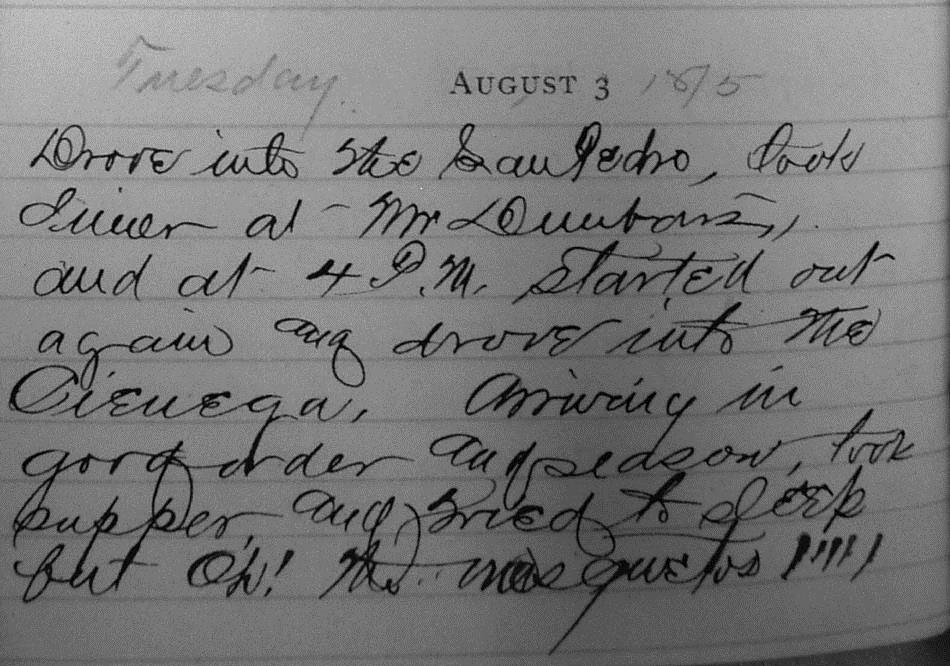 From John Clum’s personal diary, dated Tuesday, August 3rd, 1875: “Drove into the San Pedro, took dinner at [Thomas] Dunbar’s, and at 4 P.M. started out again and drove into the Cienega. Arriving in good order and season, took supper and tried to sleep but Oh! The Mosquitos!!!” Courtesy of the U of A Special Collections.
A BRIDGE OVER SHALLOW, MUDDY WATERS
In November of 1878 the Pima County Board of Supervisors was petitioned by Thomas Dunbar to build a bridge at Tres Alamos. Dunbar operated a stage stop competing with Billy Ohnesorgen, and understood as did others the need for a reliable bridge during unpredictable flash flooding caused by summer rains. Dunbar wrote the Board that “After having examined the Bridge I think the following material needed [is] 4 stringers 24 feet long…it will take about 300 feet of 3 inch plank to cover it…cost about $550…Thomas Dunbar.” (Note that Dunbar states that “after having examined the Bridge” which may mean that one already existed but was in disrepair, or it was a projection of what would be needed, or poor wording on his part, as much of the letter is written in broken sentences.)  The “stringers” mentioned were the long beams of wood which would cross the span of the river, and then planks would be nailed into those beams creating a bridge that wagons could easily cross. That Dunbar notes that the stringers needed to be 24 feet long indicates that the width of the river at Tres Alamos, at that time, was narrow, as the stringers would have to rest on the solid ground of both banks of the San Pedro.
The need for a proper crossing at Tres Alamos would be met not by Pima County with tax dollars, but by the private funding and initiative of Billy Ohnesorgen. In August of 1879 Ohnesorgen advertised that he had “completed a good and substantial bridge across the San Pedro River, at San Pedro Station, A.T., at his own expense, and will, therefore, collect toll from those using it until he is reimbursed. High water hereafter will be no obstruction to freight and travel.”  The ad was written to address prescient issues, and may have been a response to the construction of a new stage road from Tucson to Contention. A bridge wasn’t as necessary at Tres Alamos is it would be for traffic between Charleston on the west side of the San Pedro, and Millville on the opposite bank. Charleston was known for having repetitive quicksand issues in the river, whereas Tres Alamos didn’t seem to be plagued with the same problem and to the same degree. The only time when this bridge would matter was if a summer monsoonal or other rainstorm raised waters on the San Pedro, but such occurrences were rare. Also, substantial freight shipments had traveled from Mesilla, New Mexico to Tucson, A.T. for years, with drivers crossing the bottom of the river, often without incident.
But Ohnesorgan’s bridge would be of valuable use for the shipments of industrial mining and milling equipment heading for Contention, Millville, and Tombstone. “In the winter of 1878-79, I built the toll bridge. There was no cut in the river then. You could have stooped down and drank out of it at any point. The bridge only had a 25-foot span. I bought four stringers from the sawmill in the Huachucas [the saw mill that William Gird founded with help from Richard Gird, later sold to Jimmy Carr] and they cost me $55.00 each. I built the bridge myself, of course, and that did not cost me anything. The thing [the bridge] did not pay until 1880, when they were bringing in machinery for Contention, Charleston…That year was high water and one month I took in $400.00.”
Ohnesorgen’s ad noted that he had constructed the bridge “at his own expense, and will, therefore, collect toll from those using it until he is reimbursed.” The point needed to be made publicly as he later recalled…“My, how people hated to pay [the] toll. They declared it was a public highway. I told them the highway went through the river and they could use it if they wished, but the bridge was on my land and if they used it they would have to pay toll.” But given that he had paid $220.00 for the four stringers which were the key to the bridge, it appears that in 1880 he had more than made his investment back, and yet was still charging for the use of the bridge. This is contrary to his earlier statement that he only planned to collect the toll “from those using it until he is reimbursed.”
An early customer of this toll bridge enterprise would be the Contention mill. So substantial were the early shipments to the Contention Mill that the freighting firm hired to haul the equipment from the end of railroad to the site had lacked the capacity to move all of it at once. “Buckalew’s [freight line] passed through town [Tucson] this morning with another load of machinery for the Contention mill, the weight of which aggregated 114,000 pounds. They expect to arrive at the mill site on the San Pedro in about four days. There is still about sixty five thousand pounds at the end of the railroad.”

Notice of Billy Ohnesorgen’s bridge, from the Daily Arizona Citizen, August 6, 1879. Original in the collections of John D. Rose.
A delay in stage coach travel through Drew’s Station would occur when this bridge was damaged in the summer monsoons of 1880. “Delayed. The non-arrival of the stages on time from Benson was caused by heavy roads [rains] and the delay was caused by the carrying away of the bridge across the San Pedro River, this latter occurring some days since.”
Writing a letter to her hometown newspaper, Clara Spalding Brown offered a vivid description of the storms that had caused the damage to Ohnesorgen’s bridge. “Last year the rainy season was inaugurated by smart shows last in June, and July and August were very wet months…Sometimes they would appear to center over Tombstone, the thunder would roll as if some mighty giant were patronizing a mammoth bowling alley close at hand, and the lightning would flash almost continually, and every one would be pleased with the prospects of a terrific shower; yet soon the threatening clouds would disperse in all directions, and, at different points along the horizon, we could discern where the fury of the elements was spent.”
Tres Alamos would eventually be usurped by the founding of Benson Arizona. And the founding of Benson meant that the Southern Pacific Railroad offered travelers the most advanced conveyance of the day. Stage coaches could never compete with the arrival of railroads. This once vital stage stop that gave travelers refuge from the elements and their fears of the area in general, would soon turn into a remote location and largely forgotten with the passage of time. But its legacy remains an important one. In its day, Tres Alamos was a vital stop as the Arizona Territory slowly gained its populace while its place in the American West.
The above information is in part excerpted from On the Road to Tombstone, by John D. Rose, published in 2012. This is the first book devoted in great detail to Fairbank, Contention City, and legendary Drew’s Station, but also offering an in depth view of the importance of Tres Alamos as an early transportation hub in the wilds of the Arizona Territory. For more on this story and other research breakthroughs, this book is available at https://www.createspace.com/3952635 as well as Amazon.com. 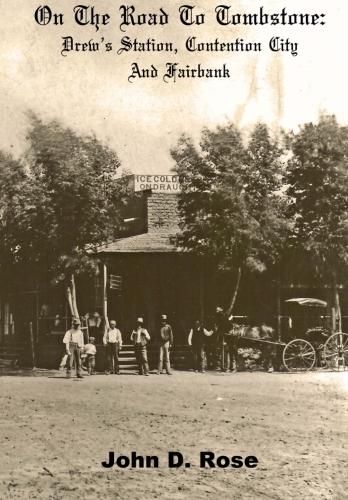