Glenn Boyer and the Commercial Advertiser
By John D. Rose 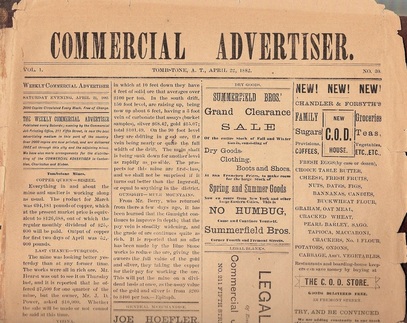 April 22, 1882
On page 13 of Al Turner’s book entitled “The O.K. Corral Inquest,” the following appears in the forward written  by Glenn Boyer: “The absolute confirmation of the sub rosa role played by the Earps in Tombstone appears in the pages of the Commercial Advertiser after their final departure…On Saturday, April 22, 1882, in what is almost certainly a reference to the fact that the Earps were by then fugitives in Colorado…on page 2, column 3: ‘It seems that at this time the people of this city have lost their old staunch champions, but perhaps it is just as well that it is so, and better, that both city and people look out for themselves and fight their own battles.’”
Referring to the Editor of the paper, Mr. Boyer further adds that in "Hasselgren's Advertiser appears at least grudging acknowledgement of what the Earps were-and did-in Tombstone.”
There’s no question that the Earp’s and their related controversies clearly had an impact on Tombstone while they lived there. At the same time, context is important. The Commercial Advertiser which Boyer quotes is a very scarce Tombstone antique to say the least. An inventory of existing historic Arizona newspapers was published in July, 1949. Known as the University of Arizona Bulletin Newspapers and Periodicals of Arizona 1859-1911, it makes no mention of the existence of the Commercial Advertiser, nor have I seen these scarce papers on microfilm. A few years ago, I purchased a number these scarce papers, including the Commercial Advertiser dated April 22, 1882 which Mr. Boyer sites. These papers came from the estate of John D. Gilchriese.
In reading this issue of the Advertiser I see no meaning that alludes to the Earps’ role in Tombstone. As a collector, I would be happy if this paper mentioned the Earps’ in some direct or indirect manner, as that makes the paper even more desirable to myself and other Tombstone/Earp collectors as well. But such is not the meaning that I gather when reading it.
The portion of the paper that Mr. Boyer cites also refers to an article above on the same page of the Advertiser, so I am publishing  the full page for first time so as to allow the reader the fullest import so that they can form their own views. Note that the Advertiser published two thousand copies at each printing, which was double what the Epitaph ran at each pressing. The Commercial Advertiser was given out for free and supported by advertising dollars from local Tombstone businesses, some of which are in this same page. Though the ads on this page from C.S. Fly, G.F. Spangenburg, A.J Ritter, The San Jose House, Papago cash store and the Maison Doree are of course significant, my personal favorite is at the top left, for Madam Ralph, the fortune teller.
-John Rose 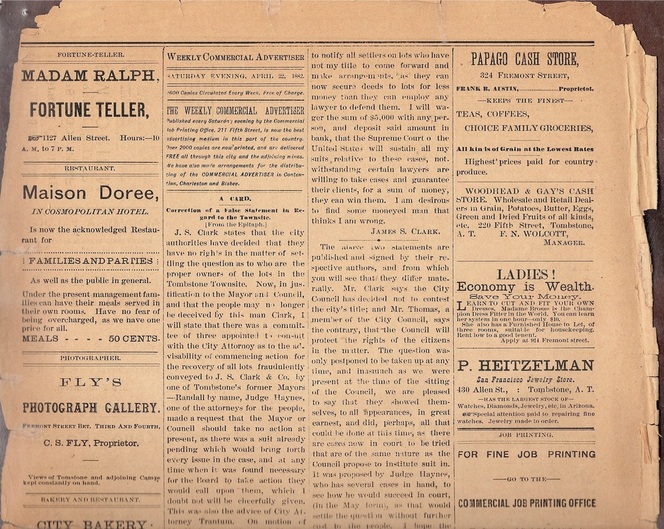 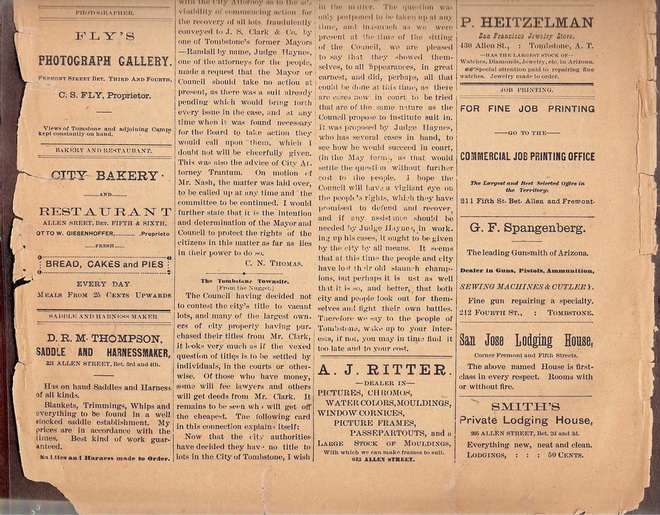