I'd like to add other bits of research that wouldn’t fit well in the body of the article.  (The True Location of Cottonwood Spring)

The importance of the map that Wyatt Earp drew and John Flood labeled.
The accounts of the Iron Spring fight differ in some areas. Flood says March 24th 1882 was cold, but the 1896 San Francisco Examiner article by Wyatt and his ghost writer refer to an inferno, just to name two minor examples.
But the Earp/Flood map of 1926 is very different, as it’s the only map, known to exist, drawn by any participant in the fight; therefore, this is Wyatt Earp’s personally recorded memory of the fight. Interviews conducted with writers (John Flood and Forrestine Hooker for example) or newspaper reporters (Denver Republican 1893) are still subject to the interpretation of how the interviewer/writer understood and assembled the information given by Earp. Such versions are valuable but there is a secondary human element which could slightly alter a given detail or nuance to the account.
Not so with the Earp/Flood map. This historical primary source document was drawn by Wyatt Earp, and he instructed John Flood to label each location. It is unlikely that as Forrestine Hooker assembled her “Hooker manuscript,” Wyatt stood over her shoulder and supervised the final draft. The same is likely true for the unnamed Denver reporter who wrote the 1893 interview. Therefore, the Earp/Flood map stands alone as the principal primary source related to the location of this fight. Although the map contains a minor labeling error by Flood showing Tucson North of Tombstone, the map offers the most direct detail available from a participant in this incident.
QUESTION-Is it possible that the Earp route began in the area of Fairbank near the confluence of the San Pedro and Babocomari Rivers?
ANSWER-No. (see close up of map below) Although the Earp/Flood map is not drawn to scale, it clearly shows the location of Fairbank, Contention, and Drew’s Ranch (referred to as Drew’s Station in the rest of this article) as well as the San Pedro and Babacomari Rivers. Contention City (which today is in ruins) is 3.37 miles Northwest of Fairbank, and Drew’s Station is 1.5 miles Northeast of the southern end of Contention City, and one mile north of its northern end, at the Head Center Mill. Wyatt Earp made it very clear on his hand drawn map that his posse left for the spring at a point along the San Pedro River between Contention City and Drew’s Station. There can be no doubt on this point. The only way it can be believed today that the Earp posse left the San Pedro River from the Fairbank area is that the Earp map is now being re-drawn over 80 years after his death. 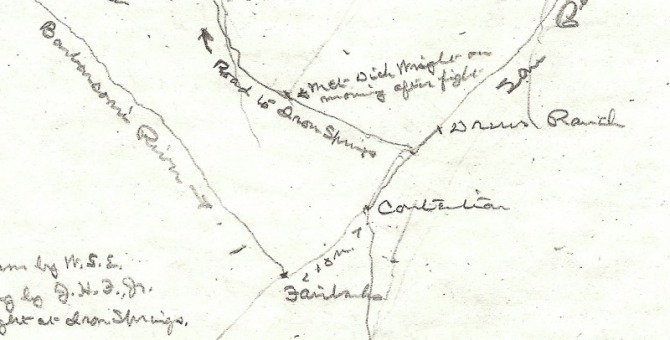 QUESTION-Would the Earps have only used roads that were on maps in the 1880’s?
ANSWER-No. It would not have been necessary to use only mapped roads. Major roads that connected Tombstone to Charleston, Hereford, Bisbee, Contention, Benson, etc., are of course mapped, as well as some lesser routes. Not every route from a town to a spring was mapped. There were many horseback trails that were not mapped. Still today in southeastern Arizona there is a number of dirt roads that lead to home sites that do not show up on many maps. The historical record furnishes confirmation that known locations without mapped roads leading to them still had many visits to them.
While referring to Mescal Spring, researcher- author Lynn Bailey noted, “the free-flowing springs a short distance to the east had served commerce passing between the San Pedro Valley and the Sonoita region since the founding of the Babocomari rancho in 1820s. At that time the springs were called La Agua de las Mesteña, the Whetstones being called La Sierra de las Mesteña. When the name Whetstone was applied to the mountains, the water source was merely labeled Whetstone springs. Dependable water made the springs the stopping place for Apache raiders, military patrols, freighters, woodcutters, and legitimate travelers. Disreputable characters entered the scene when Juan Vasquez, a Tucson “bootlegger,” built a cabin of sorts and erected a mescal distillery sometime in 1878 or ’79. Hence the name Mescal Springs. After that the springs became a rendezvous for smugglers and rustlers.”

Mr. Bailey’s research proves that travel in and out of unmapped areas was common place. The late 19th Century map in my possession shows that Mescal Spring, to which Mr. Bailey refers, has no route to it that connects to any other point of civilization. Another map referred to as the “Spencer map” shows what could be a route in the area of Mescal Spring, but it not topographic.  The commerce that Mr. Bailey refers to had to travel to and from that spring, so how did they get there? Horseback trails. There was no reason that that the Earp posse would have felt it necessary to only use roads on maps. That Flood labeled the route to Iron Spring as a road does not prove that this was anything more than a route that could have easily been a horseback trail. The Earp map shows the route that Wyatt Earp took from the Mexican wood camp back to the point of the “road to Iron Spring” where Wyatt met with Dick Wright the morning after the fight. One is designated by Flood as a road, the other is not, and yet the map shows that both were traveled by Earp, one before and the other after the fight.
Is it possible that the Earp route to the fight, after leaving the San Pedro North of Contention City, could have traveled through Fairbank and Camp Wallen, near the Babocomari River?
No. There is no source that the Earp posse traveled through Camp Wallen, and such a route adds an unjustifiable amount of mileage. This also runs counter to Wyatt’s plan to arrive at Iron Spring before Charlie Smith and the $1,000.00 cash. The Earp map makes it clear that the route to Iron Spring was nowhere near the Babocomari, which is near Camp Wallen. See map below. 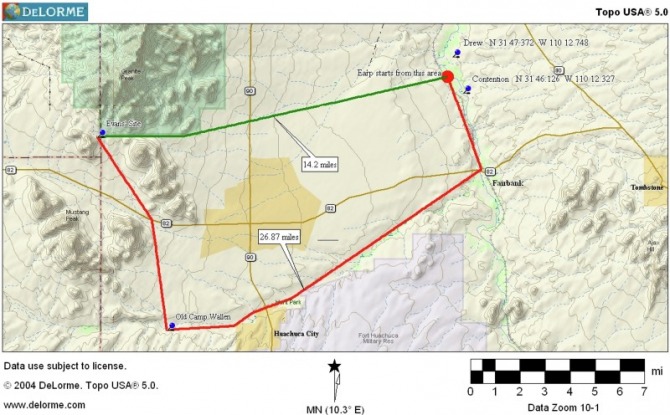 Can there be any question that the site of the Earp/Brocius shootout happened in a wash without a spring?
No and here’s why. Wyatt Earp drew on his map that when he saw Curly Bill, he also saw a tent along the wash below, Curly Bill himself cooking, a “gun” nearby, and he also notes the spring, which may have been the water source with which Curly Bill was cooking. The map is very clear as is the Flood account. “Just beyond a shallow pool where the brook trickled forth…” Doc Holliday said that after “a long dry ride from the San Pedro river, we approached a spring…”
The spring was to be a water source for the Earp posse, but it was also a known point at which Charlie Smith could locate Wyatt. Otherwise, it makes little sense for Wyatt Earp to tell Charlie Smith to meet him with important funds at an ambiguous location. Also, that people of that day would understand where a spring in the hinterlands was located is not surprising. But the idea that Earp might say “meet us in a dry wash a certain distance from an actual spring” defies reason. (Below is a close up from the Earp/Flood map showing the spring. We have added an underline to the word “spring” so as to make it easier for the reader to locate. With the exception of the underline, this is a crop from of the original Earp/Flood map) 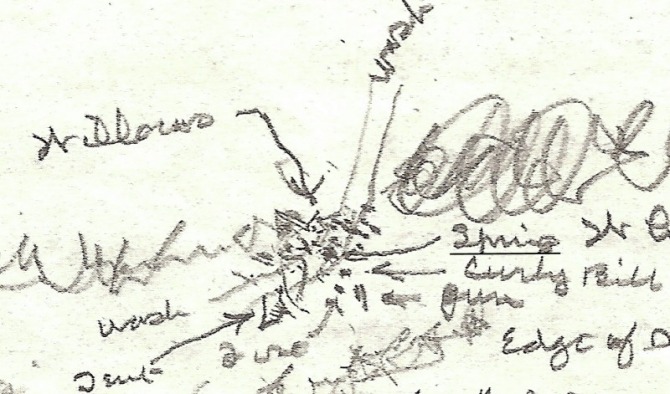