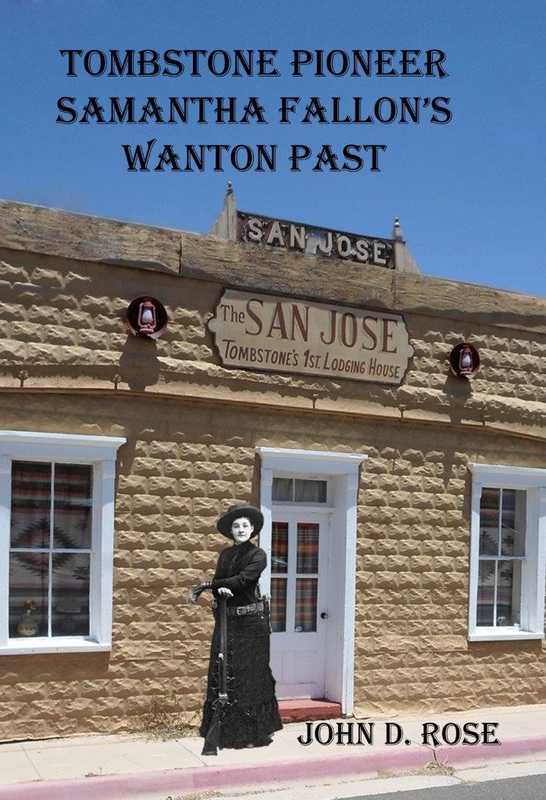 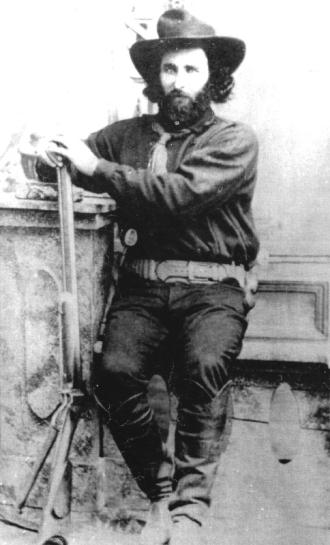 Tombstone Discoverer Ed Schieffelin, who aided Fallon financially as she built the San Jose House.
This was clearly a turning point in the life of Samantha Fallon/Mrs. Logie. It may have also been part of why she was so bitter in her old age about her economic struggle.  Logie’s repeated comments about how poorly her husband made his investments may have been fueled partly by her regret over the loss of her relationship with Schieffelin, who was indeed the discoverer of Tombstone’s early mines, becoming wealthy in the process. The fact that he was unhappy with her “running around with other men” points to a lifestyle that befits a woman of the “sporting crowd,” and if she were involved with these men in a way that borders on prostitution, she may have rationalized her behavior as simple business transactions, thus the defense that nothing immoral took place. The larger question is one that perhaps Mrs. Logie herself could not or maybe would not have been able to address honestly. Why over four decades later did she still miss Ed Schieffelin?  Was she capable of genuine affection?  Or was it a painful understanding that her youthful indiscretions had cost her perhaps her one true chance of living a life of great wealth and leisure. Ed Schieffelin may well have been the only man who had ever cared for her who could fulfill her dreams of nearly endless resources with which to indulge her every whim. Turning her down may well have been the best decision he made, as life with Samantha Fallon might have been a complicated, expensive, and trying event.
Mrs. Logie continued to add names to her conversation with Agent E.L.B. “The John Douglas referred to in her story was one of her affinities and his sons are still in Tucson, which is a comparatively short distance from Tombstone. At that time he was the owner of the stage station at Tucson, Arizona. Two other roomers were Mr. Richard Gird and a Mr. Gorman.” That Richard Gird may have roomed at the San Jose House follows the link between him and Tombstone’s founder, Ed Schieffelin, the two having formed a winning partnership of mineral and mining savvy, and incomparable organizational and business skills. Further, Gird wed in early 1880, and Logie’s claim that he roomed at the San Jose House, which opened near the same time frame, is fascinating, although the accuracy of her statements cannot be proven. 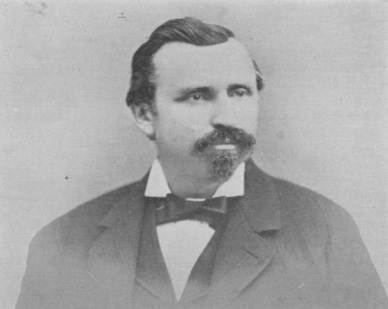 Richard Gird, partner of Ed and Al Schieffelin, whom Mrs. Logie claimed spent time at the San Jose House.
Agent E.L.B. was about to learn more about the Glendale, California reputation of Logie, this time from a neighbor who told a cautionary tale. Under the guise of wanting “to borrow something” from Logie, a Mrs. Johnson, a nearby neighbor, paid a visit. But Mrs. Johnson chose a moment when Logie was at another neighbor’s house, and given the proximity, may have watched her go to the neighbor’s house in hopes of prying information about her from this new roomer. As agent E.L.B. wrote, “This morning Mrs. Johnson, a neighbor, came to the house to  borrow something from Mrs. Logie and as Mrs. Logie went to a nearby house to see another member of the church, Mrs. Johnson waited for her to return and while alone with me she wanted to know if I had known Mrs. Logie very long. I answered negatively and informed her that I knew Mrs. Logie only by chance while looking for a room to rent.” Agent E.L.B. was handling a nosey neighbor’s query well, and if she had not, this one conversation could have easily blown her cover and ruined the operation.
“Mrs. Johnson wanted to know how Mrs. Logie behaves herself with me, if she gets cranky, etc. I told Mrs. Johnson that I find Mrs. Logie to be a very fine old lady and very educated and she agreed with me that Mrs. Logie is a fine woman but nevertheless she told me to watch my things, otherwise I will miss something, as Mrs. Logie has the habit of stealing things from her roomers and for this reason she has bad luck in trying to keep roomers in her house. Mrs. Johnson then told me that Mrs. Logie landed in Glendale four or five years ago and no one was ever able to learn where she comes from. She is an awful story teller, Mrs. Johnson remarked; once she comes from Arizona and then she comes from entirely different states but no one really knows her real past.” It is indeed ironic that Mrs. Johnson would make such a statement to perhaps the only person who had a real chance of unraveling her murky and contradictory story.
Logie soon returned home and found Mr. Johnson and agent E.L.B. in conversation. She appeared concerned. “Mrs. Logie returned and did not like to see Mrs. Johnson alone with me and after she left she was very anxious to learn if she had talked about her. I assured her that our conversation was on other subjects…and at one point she stated that if she had the money she would like to return to Arizona as she thinks there is no place like that State. This evening we spent several hours in correcting her story but no allusion was made by her to any point of her story, only she wished she had her youth again as she had in Arizona in ’79, she would be a very wealthy woman today.” 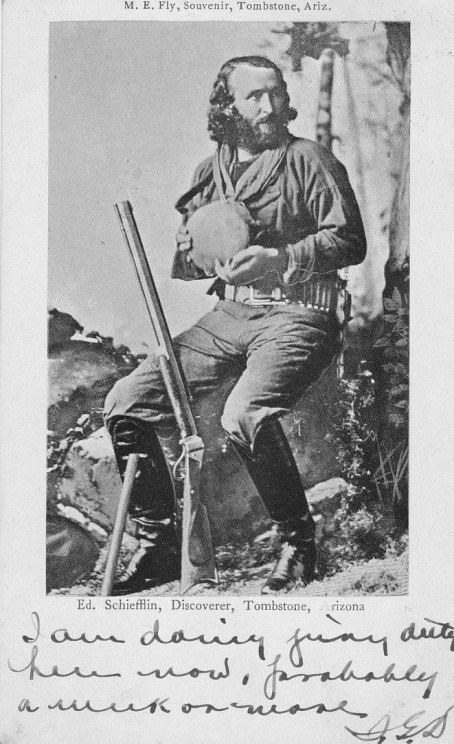 Ed Schieffelin
If anything could every humanize Logie/Fallon, it was perhaps a simple trinket that she mentioned in her manuscript and the story that accompanied it. She credited this portion of Bessie’s story to Ed Bush, as he had arranged over forty years prior the discovery of a trinket by a young Samantha Fallon, as a surprise and sign of affection, and she treasured this miniature of a small deer even as late as 1925. As Agent E.L.B. wrote, “She is very much in love yet in spite of her advanced age with Ed Bush or Ed Shefflin the fellow who in the story promoted a party to hunt for a miniature deer that was afterwards found hidden in a place where Ed Bush had purposely hid it and the little miniature is now the possession of Mrs. Logie.”  Mrs. Logie would refer often to Ed Schieffelin and an Ed Bullock interchangeably as Ed Bush. Both men had died years before, with Schieffelin passing in 1897, and Bullock in 1905. She would often confuse these two in conversations with Agent E.L.B., for reasons perhaps known only to herself.  E.L.B. consistently spelled “Schieffelin” as “Schefflin” or “Shefflin.”
Fallon didn’t marry Schieffelin or Ed Bullock, the latter being the true love of her life. She would instead marry Zachary Taylor, who like Ed Bullock, was interested in the local livery business in Tombstone. 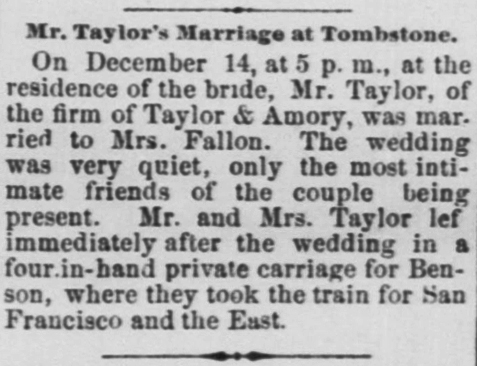 Samantha Fallon marries Zachary Taylor, though she would later state that she never loved him. Weekly Arizona Citizen, December 18, 1880.
The above information is in part excerpted from Tombstone Pioneer Samantha Fallon’s Wanton Past by John D. Rose. This book contained so much new research and breakthrough that awarding winning Tombstone researcher and writer Robin Andrews stated that “Samantha Fallon of Tombstone, Arizona (1880) has always been a character in history that interested many of us in the Earp/Tombstone, Arizona history field. Like many others, she was one of those who seemed to have teetered on that fence between good and bad, which is probably why she has always intrigued us. She had enough association with the good side to make us wonder if the gossip of her living on the bad side was just that, gossip by old timers and their self serving stories.
“John D. Rose, a well known Arizona artifact collector, historian and prolific writer, has once again brought to the public, from a court case pulled out of the musty old files of "Archivaldom" an interesting and entertaining story for those of us who just can't get enough of Tombstone's vividly colorful Old West history. For those of us who's passion it is to do biographical works on 19th century Arizona citizens, it is a bit difficult at times to get a real feel for the personal side of that person 'long at rest'. When we only have the official records to go by, the story often times lacks the personal substance that brings the story to life. This book is different.
“This fifth book on southwest Arizona, and second of its kind by Rose, lets us into the minds and actions of its characters - in their own words. Every so often we are gifted with such a story - in their own words. This one gift is not to be passed up by those who need to know all there is to know about Tombstone and its most colorful characters.” –Robin Andrews
Tombstone Pioneer Samantha Fallon’s Wanton Past by John D. Rose is available at https://www.createspace.com/4334766 and Amazon.com
Click the book cover below to order a copy. 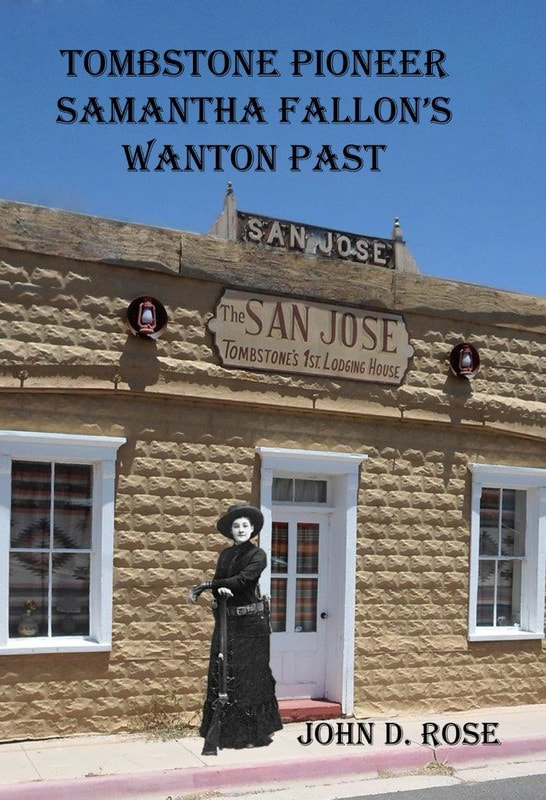