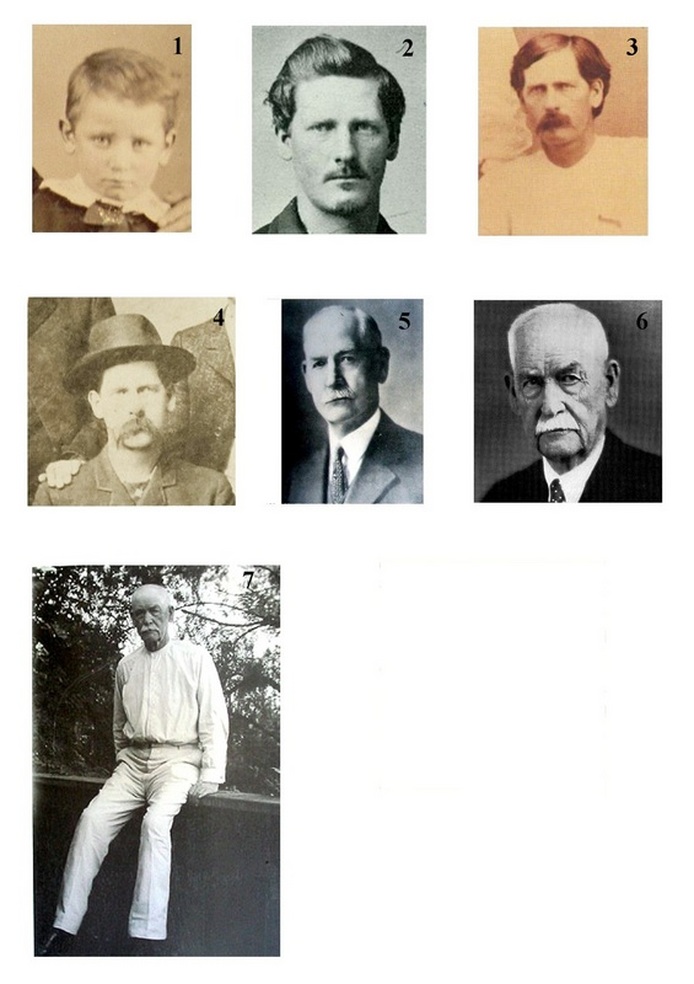 Wyatt Earp photos ...
1)   This photo was cropped from the original  photo of Wyatt as a young boy with his mother.  From the collections of John D. Rose.
2) Sometimes referred to as the "Lamar" photo, circa Wyatt’s time in Lamar Missouri, and taken approximately between 1869 and 1871.
3) Taken from the famous photo of Wyatt along with Bat Masterson, in Dodge City, ca 1876.
4) Wyatt returned to Dodge City in June of 1883, over a year following his Tombstone residency, appearing with the "Dodge City Peace Commission."
5,6 and 7) Pictures of Wyatt in his declining years.

Photo number one courtesy of John Rose all other photos courtesy of Johns' Western Gallery, Cowan's Auctions and web sourcing.
See this link for a photo essay with time line of Wyatt's life...
http://www.pbs.org/wgbh/americanexperience/features/timeline/wyatt/ 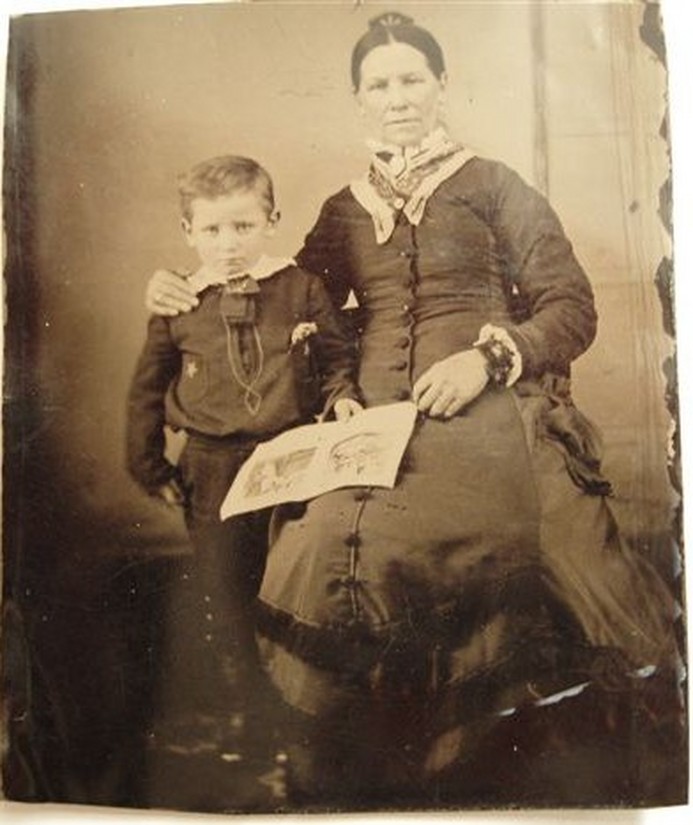 This is the complete image of Wyatt Earp and his mother, from the collections of John D. Rose. Note that Wyatt's mother is wearing a ring on her right hand instead of her left. This is because when Tintype photos were  taken, the cameras that were used reversed the actual image. When viewing the original in person it appears exactly as seen in the enlarged version just above, but what the photographer saw in the room with his own eye was Wyatt on the right side of his mother, and she on the left. The  close up of young Wyatt at the top of the page marked with the number one has been reversed digitally so that readers can see what the photographer saw with his own eyes, before his camera reversed the image. Image number one also shows his mothers left hand on his shoulder. By presenting the image in both ways, this further helps the reader to understand the photographic process of the day.

I’d like to thank my readers around the world for making WyattEarpExplorers.com the most traveled Tombstone and Earp site in the world. One of the most popular pages on the site is the “Photos of Wyatt Earp” page in the drop down menu below “Wyatt Earp.” In a recent discussion with a group of historians, I shared information about the story behind the photo, some of which was published years ago, but was still news to some. Given their enthusiasm for the information, I’m now sharing this information with my wider audience so that they can have the same insights.

I purchased the photo from the estate of the late John Gilchriese in 2005, who, prior to his death, had agreed to turn his collection over to Johns Western Gallery for auction. Owner and auctioneer Doug Johns documented in a letter to me that when Gilchriese showed him the photo of young Wyatt Earp and his mother, he (Doug Johns) reached out to add it to the items he was taking back to San Francisco for auction, but Gilchriese had a change of heart.  “’Nope,’ Gilchriese said: 'I'm not ready to let that one go.’”  And he never did. Only after his death did his family release it for auction.

In 2005 Eric Weider viewed the original in person, and in 2006, after his purchase of a group magazines that included Wild West, he asked me if Wild West could be the first to publish the photo nationally. This occurred in the October 2006 edition of Wild West Magazine,page 13, commemorating the 125th Anniversary of the Gunfight near the O.K. Corral. The web article that accompanied this publication told further the story of the photo, and has been available on the web since 2006, and it remains at the following address: http://www.historynet.com/wyatt-earps-first-star.htm

Another who viewed the original in person was accomplished Earp Historian and film consultant, Jeff Morey. In September of 2009, Eric Weider contacted me saying that  “…I just spoke to a woman [Katie Lord] who is producing a PBS special on Wyatt Earp for their award winning show ‘American Experience.’ It's a very serious and highly credible show. The historical advisor is Jeff Morey. He told them of a photo of young Wyatt with his mother that was published in Wild West a couple of years back which he thought was the real deal.”

Mr. Weider provided me with Ms. Lord’s contact information, I sent them the photo, and it appeared in their Wyatt Earp American Experience documentary which aired in early 2010. Katie Lord confirmed to me that Mr. Morey had advised them to run my Earp photo of young Wyatt and mother in their documentary, which they did at his suggestion. The timeline from this documentary has remained on the web since early 2010, and is still viewable at the following address: http://www.pbs.org/wgbh/americanexperience/features/timeline/wyatt/

I emailed Mr. Morey at the time thanking him for his research into the photo, and do so again, at this time. Mr. Morey is a devoted researcher who follows the truth wherever that path leads. The photo was most recently published in my first book, “Charleston and Millville A.T., Hell on the San Pedro.” –John Rose