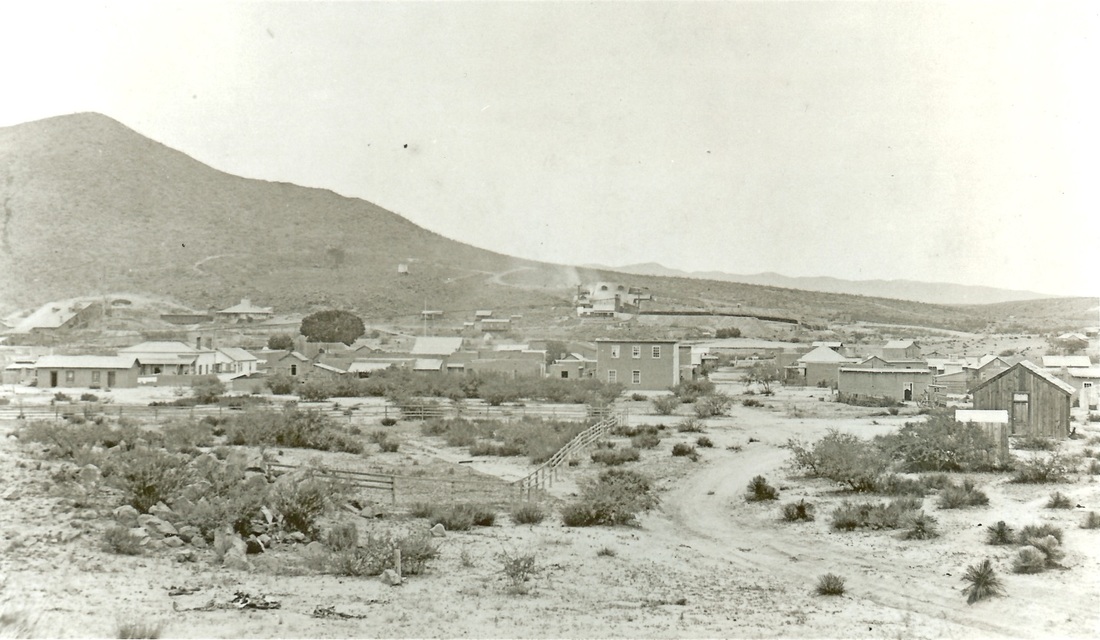 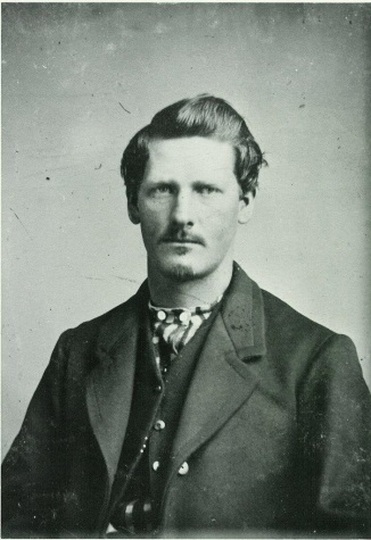 Wyatt Earp
“A short time afterwards I was in the Huachucas locating some water rights. I had started home to Tombstone. I had got within 12 or 15 miles of Charleston when I met a man named McMasters [McMasters would later join the Earp Vendetta posse].  He told me if I would hurry up, I would find my horse in Charleston. I drove into Charleston and saw my horse going through the streets toward the corral. I put up for the night in another corral. I went to [Justice Jim] Burnett’s office to get papers for the recovery of the horse. He was not at home having gone down to Sonora [Mexico] to some coal fields that had been discovered. I telegraphed to Tombstone to James Earp and told him to have papers made out and sent to me. He went to Judge Wallace and Mr. [Webster] Street. They made the papers out and sent them to Charleston by my youngest brother, Warren Earp, that night.
“While I was waiting for the papers, Billy Clanton found out that I was in town and went and tried to take the horse out of the corral. I told him that he could not take him out, that it was my horse. After the papers came, he gave the horse up without the papers being served, and asked me if I had any more horses to lose. I told him I would keep them in the stable after this, and give him no chance to steal them.”  According to Wyatt’s testimony, long before their famed confrontation in Tombstone, mistrust and animosity between the Earp and Clanton factions had begun at Charleston.
IKE CLANTON TAKES UP ARMS AGAINST A POSSE IN CHARLESTON 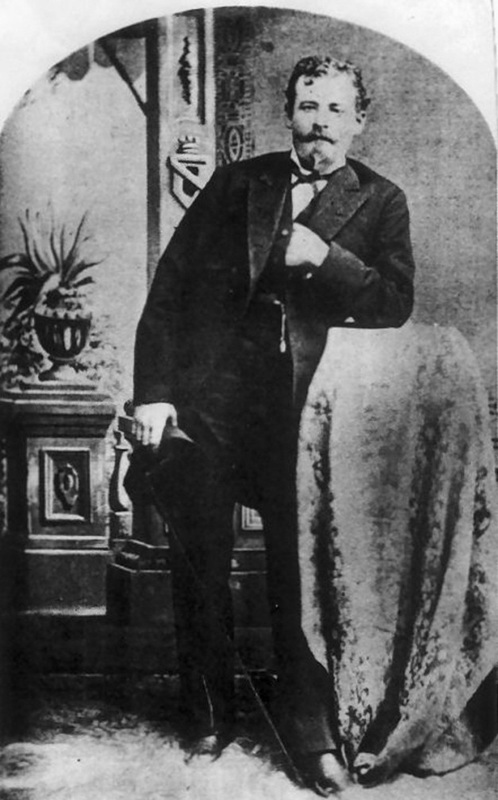 Ike Clanton
The Tombstone Epitaph reported on Wednesday, January 25, 1882 under this heading:  “The Official Scandal. Up to the time of going to press nothing has been heard from the posse that went out with Marshal [Wyatt] Earp. After the escape of Ringo it was decided to send out another posse to bring him in, as the marshal of course had no warrant for his arrest. Accordingly, yesterday morning [Tuesday] about 4 o’clock a posse of eight, led by Mr. J. Jackson, left town with a warrant for his arrest. Arriving at Charleston at daybreak they put their horses in a corral to grain and after leaving their arms at a convenient place proceeded to the Occidental hotel to get their breakfast. Upon passing the threshold they were intercepted by Isaac [Ike] Clanton and another man with drawn weapons, while the barrels of other Winchesters suddenly gleamed over the adobe wall. Mr. Jackson stated his errand. After a few words by some of the party that nobody would be arrested unless they wanted to be, Clanton stated that Johnny had always acted the gentleman toward him and he would see what could be done, the result of his efforts being that it was arranged that Ringo should return with the posse to Tombstone. A little while afterward Mr. Goodrich rode up and took Ringo [to] one side for conversation. A few moments afterward Clanton informed Mr. Jackson that Ringo had left but would [be] in Tombstone within an hour or an hour be [sic] and twenty minutes at most, and in just about the allotted time he appeared, gave himself up and was placed in the county jail. The posse returned to town about four o’clock, the intent of their mission having been achieved by the voluntary act of Ringo. They report about twenty-five cow-boys congregated at Charleston, and from a gentleman who came in late from the southern country we learn that he was passed by a quartet about four miles above Charleston, who were making excellent time in the direction of Hereford.”
A CHARLESTON BRIDE REMEMBERS
“Charleston had a main St. about 500 floating inhabitants –There were several Coralls-Resturants with plenty of Saloons, a daily stage a store that carried dry goods and groceries run by Hererire [Herrera] & McClure…Doctor Peterson was the leading Physician. I can name several characters…the Clanton boys Finn-Ike and Will. [T]their father ran a dairy near on the San Pedro River…Will the youngest son about 16 years old of age was a good boy but had no chance in life and was killed with his brothers Ike and Finn in a fight on the streets of Tombstone between the Earps and Cowboys in 1882… [Ike left the fight in 1881 alive and Finn, aka, Phinn, was not present at all]
Carrie Miles was recalling her time in Charleston and the path her family took to get there. It all started in the fall of 1879, when her father, William Douglass, relocated his family to the Arizona Territory. They left Los Angeles traveling by covered wagon, as news of Schieffelin’s discoveries caused a rush, and they were to be a part of it. While looking through the corrals of Tucson, Carrie’s father met Alexander Miles, whom he hired to haul them and their belongings on the final leg of their journey to Tombstone. But the elder Douglass would choose Charleston instead. Miles decided to settle near the family in Charleston as well, having noticed Carrie Douglass, and the two soon began to court.
THE CLANTON NAME LIVES ON IN THE LOCAL TAX ROLL
Some notables from Charleston and its environs made the delinquent tax list for 1887. It was a further sign that once-thriving businesses in Charleston were simply no longer viable. “Curry, A G, San Pedro river-Clanton Springs ranch and imp’s [improvements], 5 horses, 100 stock cattle, total value $1450, total tax and costs…49 21 [$49.21]” 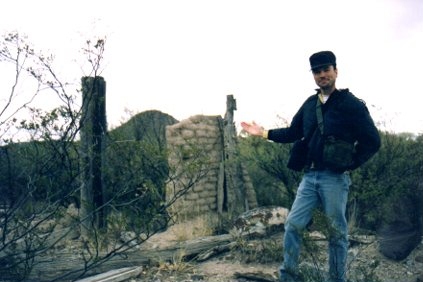 John Rose at a possible site of the Clanton Ranch.
AWAKENED BY CURLY BILL BROCIUS AT THE CLANTON RANCH
Ed Vail, of the Empire Ranch and Total Wreck town site and mine, recalled a visit to this infamous ranch and his interrupted sleep while there. It was courtesy due to a late night visit to the Clanton Ranch, by of all people, nighttime reveler, Curly Bill Brocius. “One time our foreman at Happy Valley, Young Eberhardy, whose father was buying our cattle came over one trip… We corralled at Clanton[s] for [the] night on our way over to Tombstone. Curly Bill and [an]other came home from Charl[e]ston drunk during [the] night and was shooting up  [the Clanton] ranch…[the] next morning [we] went outside & saw [a] half dozen or more quail all with heads shot off.” Frank Proctor Vail’s foreman asked who was doing the shooting outside. The casual reply, (from either one of the Clanton’s or a frequent visitor) showed that this may have been common practice for an overly imbibed Curly Bill Brocius when returning from an evening of recreation in Charleston. ‘Oh [that’s] just Curly seeing what he can do.’ Another member of Vail’s party, Young Eberhardy, later asked “did you hear my cot shaking in the night while [the] shooting was going on …” 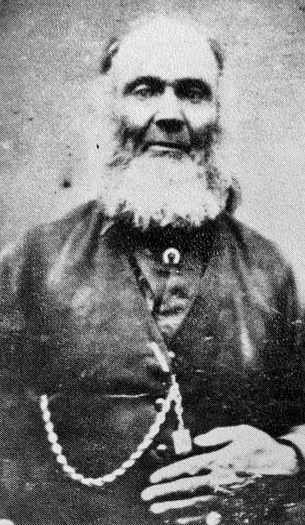 N.H. “Old Man” Clanton
N.H. “NEWMAN HAYNES’ “OLD MAN” CLANTON AND THE CHARLESTON REAL ESTATE MARKET
On November 27th, 1880, N.H. Clanton, Father of Clanton brothers, purchased lots 10 and 11 of block G, Pioneer Street in Charleston, which contained a saloon and residence of James Clark. Also included in the sale were “…all liquors and bar fixtures”  as well  as two lots on the opposite side of Pioneer street including a home that Clark had previously lived in as well. The transaction was not to be a smooth one, with seller James Clark suing N.H. Clanton to recover the property less than two weeks later, on December 3rd, 1880. Following this setback, Clanton would again try his hand at the  Charleston real estate market, later purchasing another lot and home in  Charleston on April 28th, 1881, less than four months before his death. The home was located on lot 6, block M at Charleston, with a twenty five foot frontage on Stowe Street, and a depth of one hundred feet. He  purchased the  home and land from Francisco A. and Lobia Garcia, for $100.00 cash in  hand, and the transaction was witnessed by Jim Burnett. It is indeed ironic that both Wyatt and Virgil Earp owned homes on Block M in Tombstone and the elder Clanton purchased a home on block M of Charleston. Block M of  Charleston has long since been consumed by the widening of the San Pedro River (see entry below), so this site is simply gone. This is a separate property than that of the Clanton Ranch, south of Charleston. 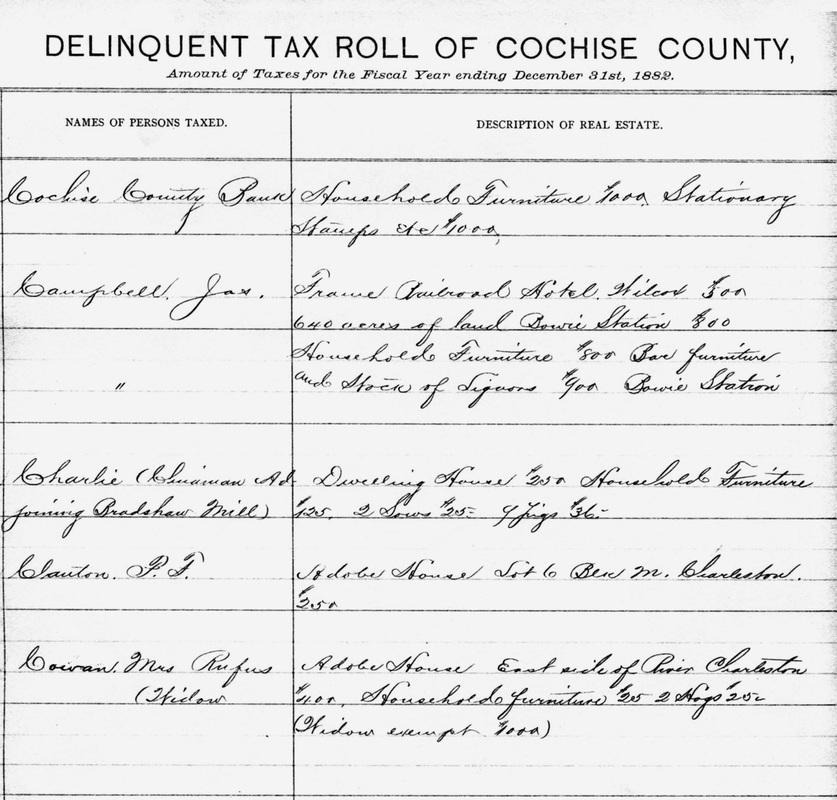 On the second entry from the bottom, Phineas “Phin” Clanton makes and unfortunate appearance in the 1882 Cochise County Delinquent role. This is courtesy of Kevin Pyles, Cochise County Archives, Bisbee Arizona. Phin Clanton has yet to pay taxes on the home formerly owned by his deceased father N.H. “Old Man” Clanton. Located on Block M, lot 6, the adobe home is valued at $250.00. 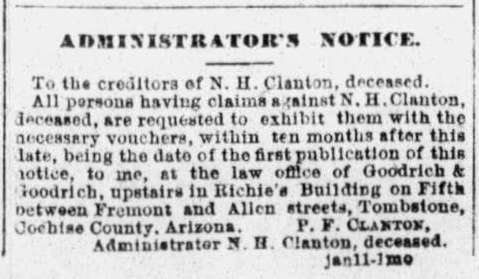 Not surprisingly, Phin Clanton was listed as the taxpayer on his father’s former Charleston adobe house, as he was the administrator of his estate. Tombstone Daily Nugget, January 14th 1882.
Near the bottom left of the Charleston plat map below, block M is visible where the elder Clanton, owned lot 6. 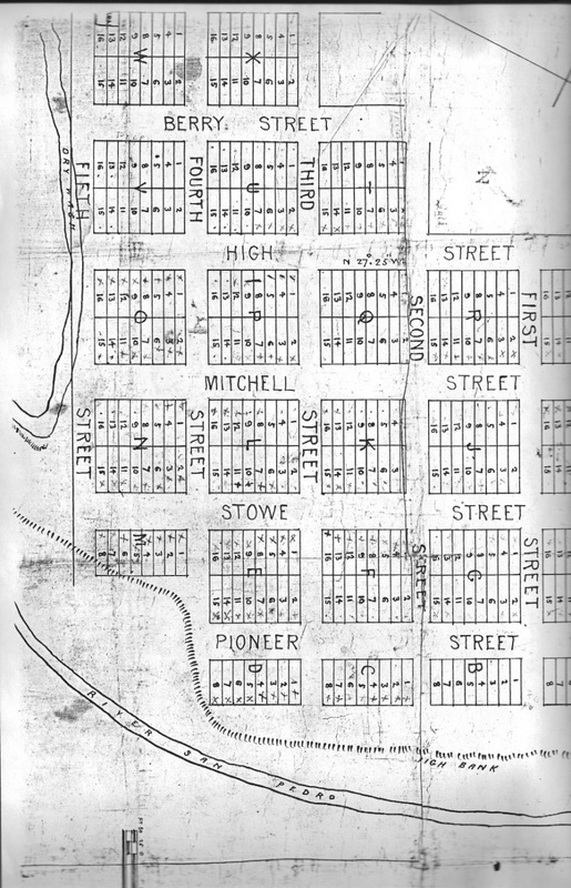 The above information is in part excerpted from “Charleston & Millville A.T. Hell on the San Pedro, by John D. Rose. This is the first and only book ever published on Charleston, released in 2012. For more on this remarkable story and far other research breakthroughs, this book is available at https://www.createspace.com/3758160. Also available at Amazon.com. 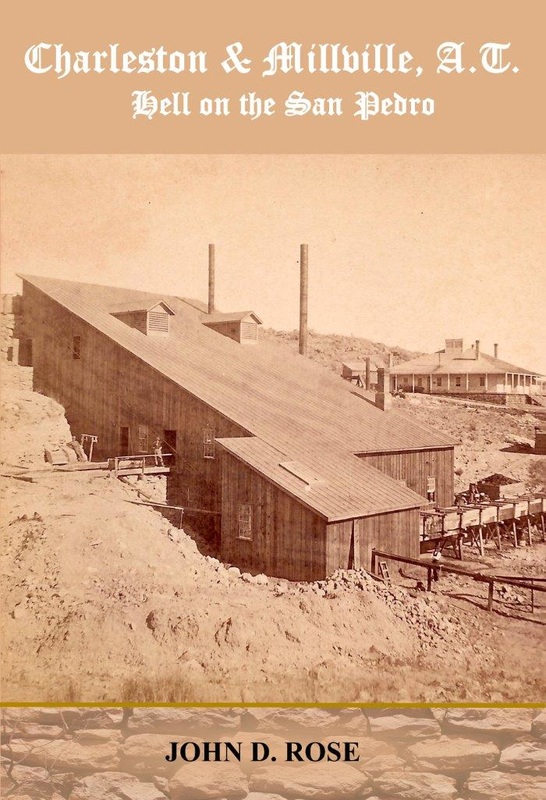