THE TRUTH ABOUT THE SAN PEDRO RIVER,
by JOHN D. ROSE.

WITHOUT QUESTION THE SAN PEDRO RIVER HAD A PROVEN, DOCUMENTED LACK OF SURFACE FLOW IN THE 19TH CENTURY.

WITHOUT QUESTION, THE QUANTITY OF COTTONWOOD TREES ON THE SAN PEDRO RIVER TODAY ARE FAR MORE ABUNDANT THAN WHAT EXISTED OVER A CENTURY AGO.

So has the growth of Fort Huachuca and Sierra Vista Arizona really reduced the River's surface flow, and diminished a nearly endless canopy of Cottonwood Trees? No, it has not. See the proof below. 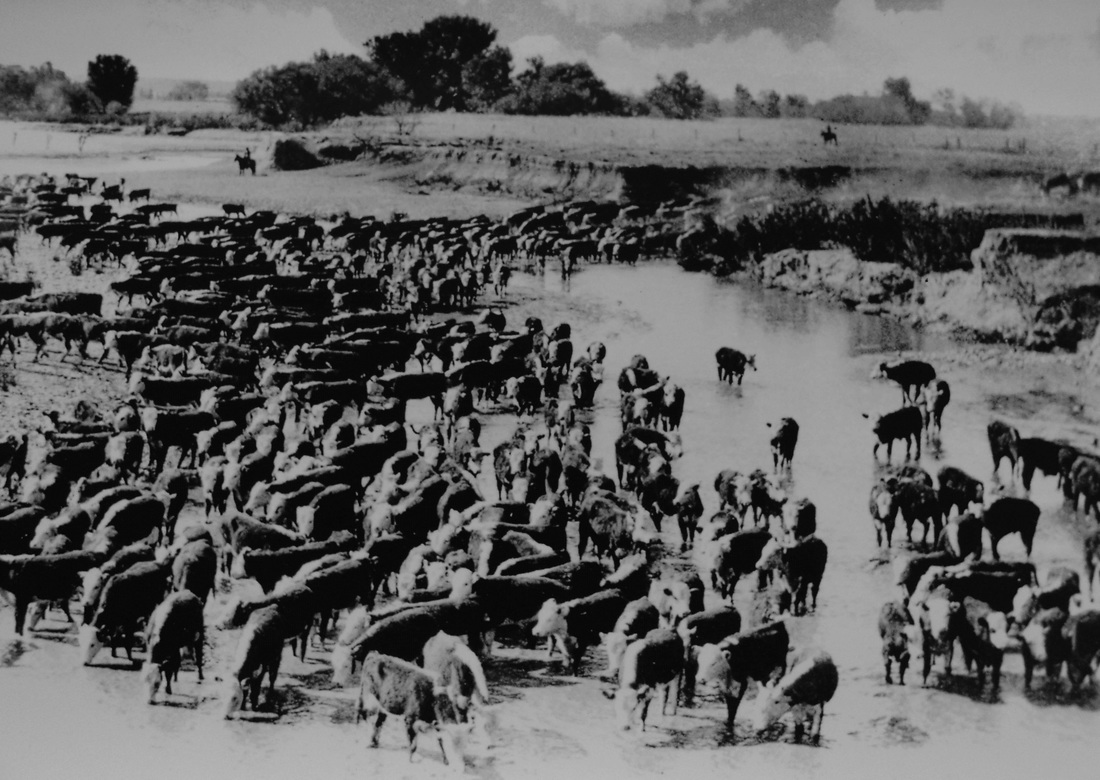 The San Pedro River has been DAMMED REPEATEDLY, proving incorrect the claim that it is the last undammed desert river in the American Southwest. Why does this completely debunked assertion continue to be publicized? Anyone pursuing these truths can simply read published proof that this author has released over a period of the last FIVE years. If they can offer contrary historical proof, why haven't they? 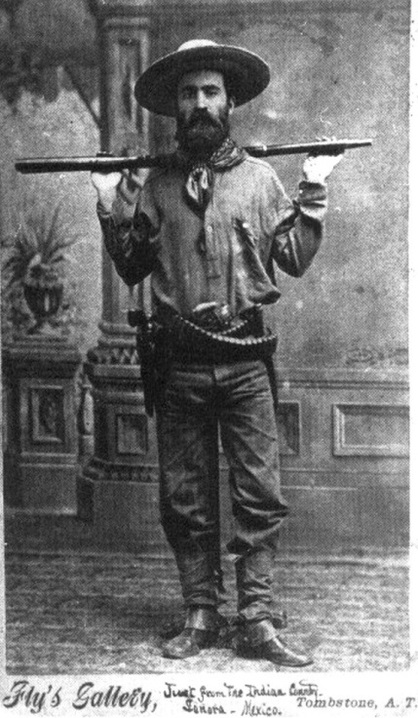 Tombstone diarist George Parsons. His journal has long been an important resource to historians given his detailed and accurate descriptions of the historical record.
IS THE SAN PEDRO RIVER REALLY THE LAST UNDAMMED RIVER IN THE SOUTHWEST?

SAN PEDRO RIVER DAM NEAR CHARLESTON IN 1880 BELOW. 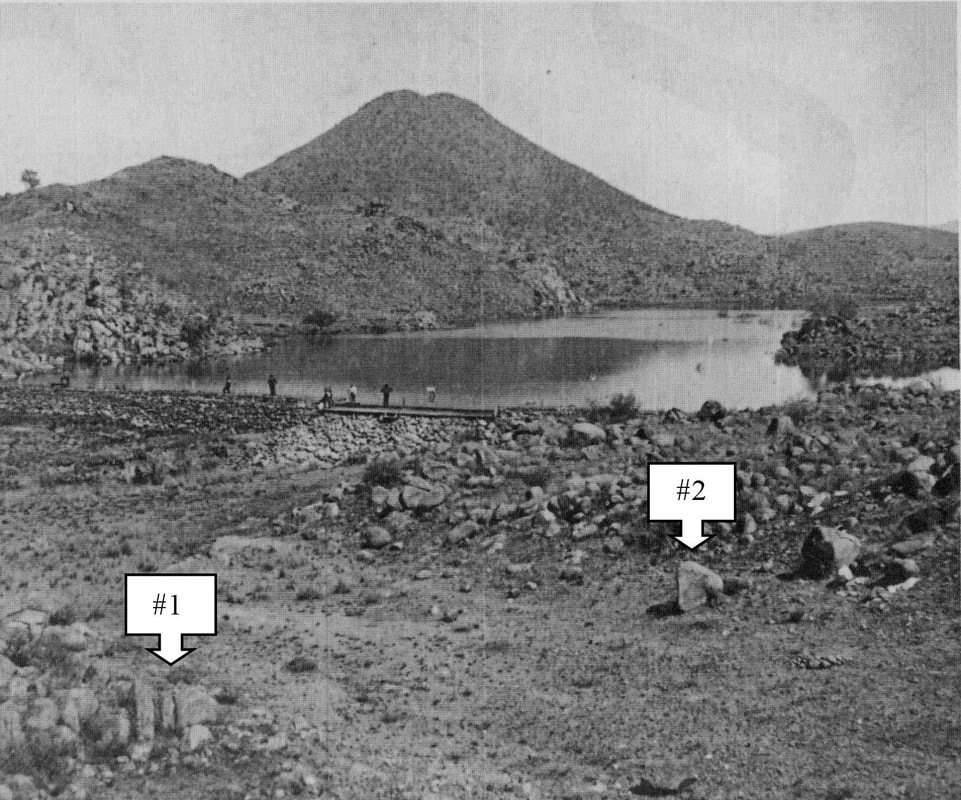 The black and white photo above was taken by Carleton Watkins in the spring of 1880. The numbers 1 and 2 have been added marking rock formations that prove this is the exact location of the Charleston Dam. After visiting Millville Parsons added that “on we went several miles to the dam which we found had given way. No chance for a swim.” The scarce surface flow that Parsons noted even when the dam was absent proves false today’s conventional belief that the San Pedro River had far greater flow in the 1880’s than it did in the 20th Century.
Six years later in the summer of 1886 Parsons was conducting a trip which included a leg along the San Pedro River.  Reports of Indian sightings were common at this time; Parsons was hoping to dodge any chance meetings with Apaches and Geronimo. On June 15th, he “lunched at St. David” noting that “The Mormons treated us well…I left others here and went to Benson for promised military escort.” On Thursday, June 17th, a jumpy Parsons needed a bath and his horse was in need of a rest. “Good bath in [the] San Pedro River this afternoon. Water didn’t quite cover me lying down, but had a good wash meantime keeping lookout for Indian.” It is noteworthy that prior to the summer rainy season, water flow in the river was scant, barely able to cover someone lying down in it.

Today, Parsons account regarding the dam near Charleston is at odds with some public statements about the river, as well as the late 19th century photographic record. The oft repeated claim that "The San Pedro River is the last undammed desert river in the American Southwest" needs further clarification. Here's why. It is true that today, in the Twenty First Century, the San Pedro is no longer dammed, and it has not been dammed in recent history. But many are surprised when being introduced to photographic proof that the river clearly was dammed prior to the modern era. And I've been asked, why is it repeatedly stated that the river is undammed, when it clearly has been. According to Wiktionary, the definition of "undammed" is "Not having been dammed." If this statement acknowledged that "Though the San Pedro is undammed today, it has been dammed in the 19th century many, many times," this would be correct.
And these photos above and below prove that the San Pedro River was dammed in 1880, and many other times as well. The color photo below shows the exact same rock formations, in the exact same locations, proving that this indeed is a modern day photo of the original Charleston dam site. Photo taken by John D. Rose in the 1990's. 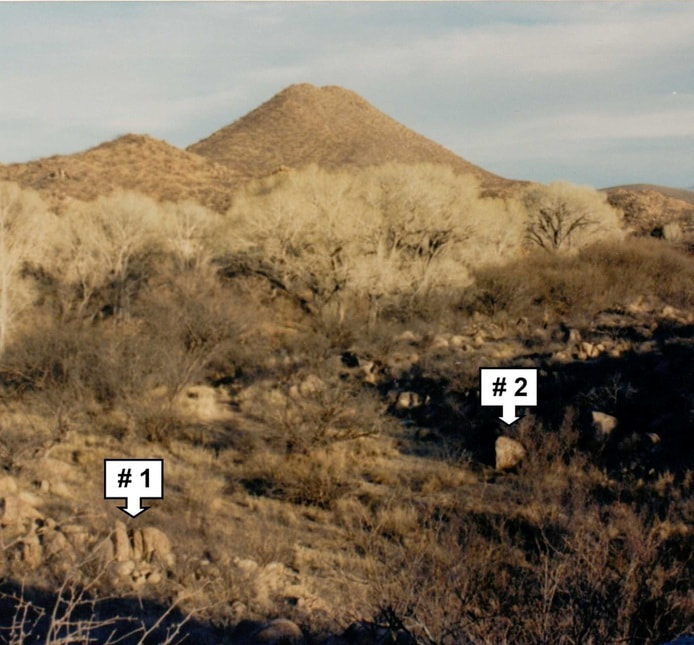 THE SAN PEDRO WAS DAMMED NEAR CONTENTION CITY IN 1879
Below: William Drew, Founder of Drew's Station, near the San Pedro, drew the map below, during the court case of "Drew vs. Mason." The case was over disputed water rights, and near the bottom of the map Drew notes a dam located in the area north of Contention City. Map courtesy of AHS.

Above is a cropping from the bottom of William Drew's map. Note that his placement of the dam is near the very bottom of the drawing, and that the dam completely blocks the river. 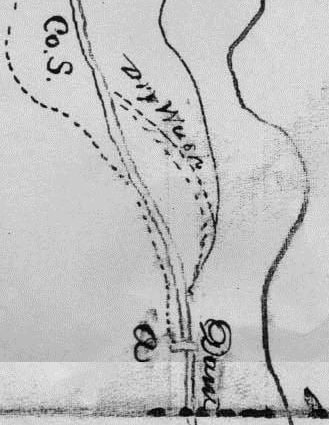 NO WATER IN THE SAN PEDRO RIVER IN 1859
The Weekly Arizonian(see below) would also record in 1859 which stage stations, along what is now commonly referred to as the Butterfield Stage route, had water and which did not, for the benefit of travelers. They reported that the San Pedro Station, which was built so close to the river that the waterway later consumed the site, was without water in 1859, long before Tombstone was even discovered and major settlements sprang up along this key, but very limited, water way. Travelers arriving in Tombstone sometimes told of having to wait to cross the river during its flooding, which only occurs after a substantial rainfall. This also proves incorrect claim that the river had a much greater surface flow before settlement and related well drilling occurred. 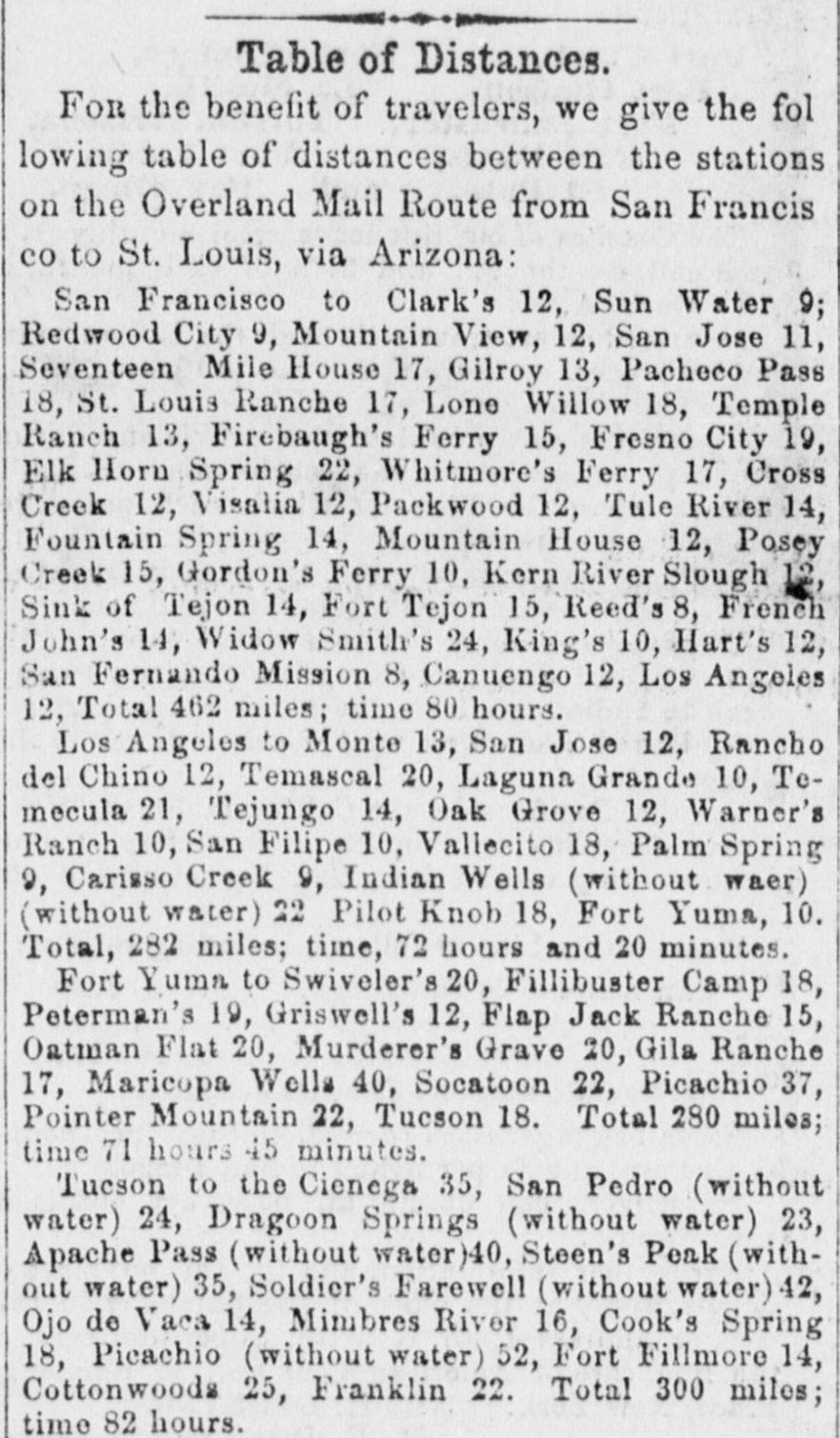 Today the San Pedro River still travels from the south to the north just as it always did, inspiring present day myths from romantics who divine a more dramatic history of this waterway.  In 1858, James B. Leach of the Department of the Interior was enlisted to supervise the construction of a roadway through southern Arizona.  “Leach and his companions had a surprise in store for them as they traveled down the San Pedro about 35 miles below Tres Alamos [north of present day Benson, where Billy Ohnesorgen had a stage stop.  This places Leach in the area of Lewis Spring, just south of Charleston, which has been a long term source of water on the San Pedro] on September 12:
“‘The train was ordered forward at 7 a.m.  Exceedingly to the surprise of every member of the expedition who had passed over this route in the months of March and April it was discovered after a march of a few miles that the waters of the San Pedro had entirely disappeared from the channel of the stream.  The discovery was first made by Col. McKinnon, Paymaster, who returned to Camp reporting according.  So incredulous were many of those who were on the April Expedition that heavy bets were offered that Col. M. was mistaken. A thorough examination proved his discovery correct much to the astonishment of many.  Where the present reporter took quantities of fine trout in March and April 1858 not a drop of water was to be seen.  The same circumstance (the sinking of the waters of the San Pedro) however, is referred to in Lt. Parkes journal of his expedition through this country.’”
It is further asserted that the grand stands of cottonwood trees that so majestically line the river at present are of ancient origin, ignoring the fact that photos taken in the historic period contradict some of these claims.
Mary Wood, wife of an important mining executive, would leave behind a credible account, her dates and figures standing up well against historical scrutiny. She recalled only one cottonwood tree in the Charleston and Millville area, and made note of it: “My first view of Millville in the fall of 1880 was a pleasant surprise for their nestling against the hills which closely circled it on the north and east was a lovely alfalfa patch of several acres.  On the western edge on the banks of the San Pedro River was a very large cottonwood whose leaves were still a vivid green…It was the first green I had seen since leaving California.”
ONLY ONE COTTONWOOD TREE AT CHARLESTON IN THE 1880's  INSTEAD OF THE MASSIVE STAND OF COTTONWOODS THAT EXISTS THERE IN 2017 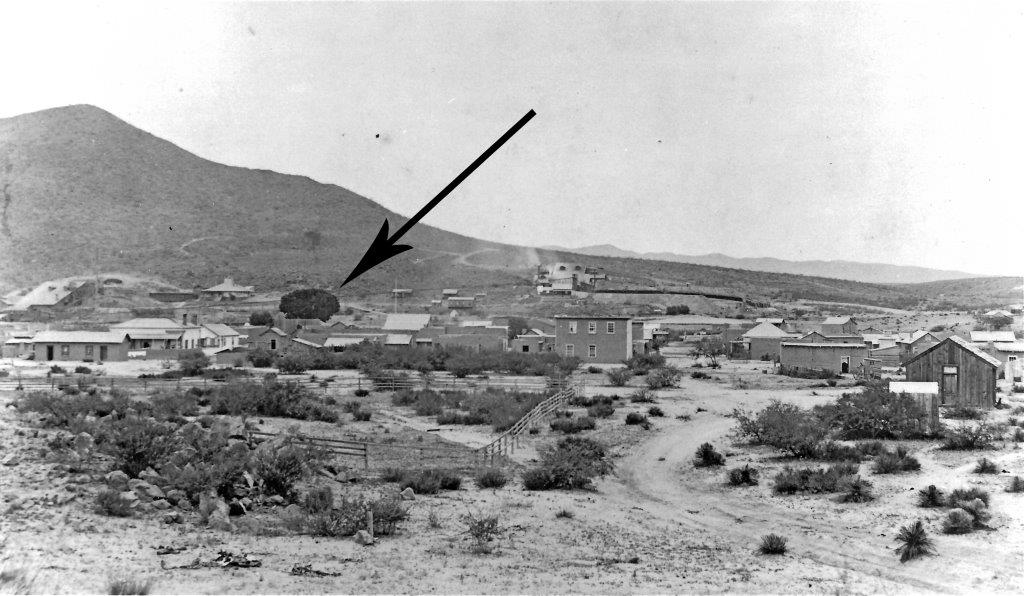 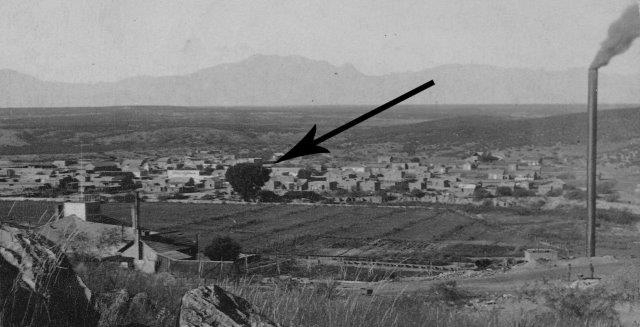 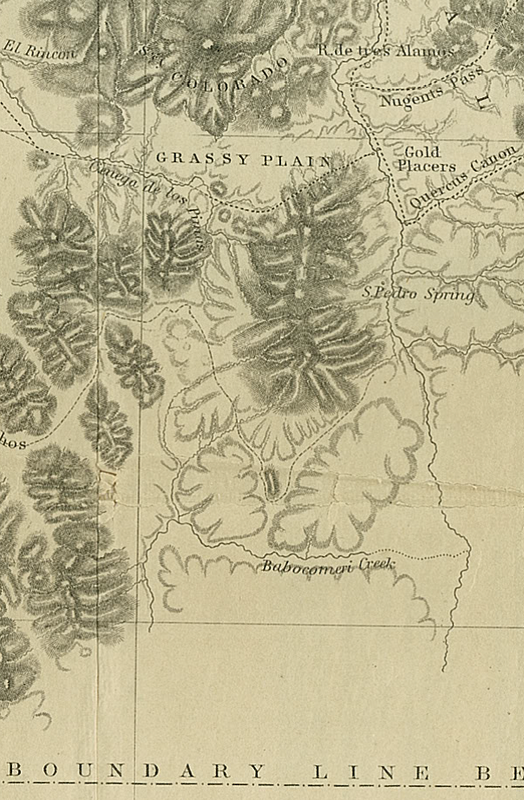 Cropped from the original map by John G. Parke, from the collections of John D. Rose.
"The flow of water, however, is not continuous." - Lt. John Parke, 1855. 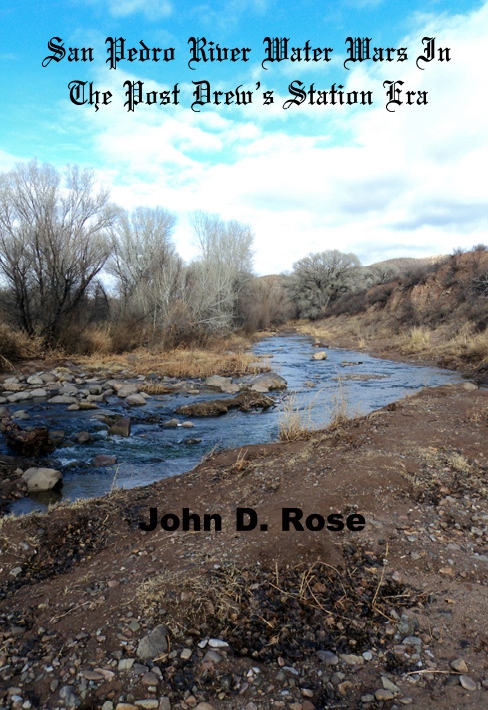