Gunfight near the O.K. Corral
By John D. Rose

Tombstone's O.K. Corral, the most famous
business name in all the American West.

Titles that evoke imagery of the Old West.  It has become one to the most discussed, debated, and celebrated events in all of Western American History. Wyatt Earp and his brothers Virgil and Morgan, along with Doc Holliday, have become near household names simply because of their involvement in this event. Frank and Tom McLaury, along with Ike and Billy Clanton are also long remembered for these scant thirty seconds in which three lives were lost, and the lives of the surviving five would be forever changed.
Some of its participants have been deified, others vilified, and every movement studied to a science by even more.  Just the name “O.K. Corral” is known throughout the world.  For many it is a partial definition of the American identity as adventurous pioneers moved west.  Others see the events at the O.K. Corral as an arrest gone bad, or simply as cold-blooded murder.
At one extreme, some view the fight as a micro-representation of the struggle between good and evil. More realistically, the Gunfight near the O.K. Corral was an ugly street fight that left three men dead, followed by a hearing that answered fewer questions than it asked, and let the survivors of the
gunfight walk free. I believe that the accomplished historian Paul Cool summed up the discussion related to this event best when he referred to it as the“who-fired-first at you-know-where.”
This debate shows no signs of dying down well over a century after the event.  What I would like to share most with our many readers around the world are not my views as to the play-by-play of every bullet, but information about where in Tombstone the gunfight took place and what the buildings looked like on that day, to give you a better feel for that time and place.  –John Rose

This Billhead from the O.K. Corral in Tombstone is one of the most sought after items in all of Western Collecting. The survival rate on these is poor...most were just thrown away. At one time, John Gilchriese, who acquired by far the most important of all Tombstone/Earp collections, was said to have owned three of them. I have owned two, this one being the earliest. It is believed that less than a dozen of these still exist, though there is no official count or way to confirm this. Courtesy of the Collections of John D. Rose. 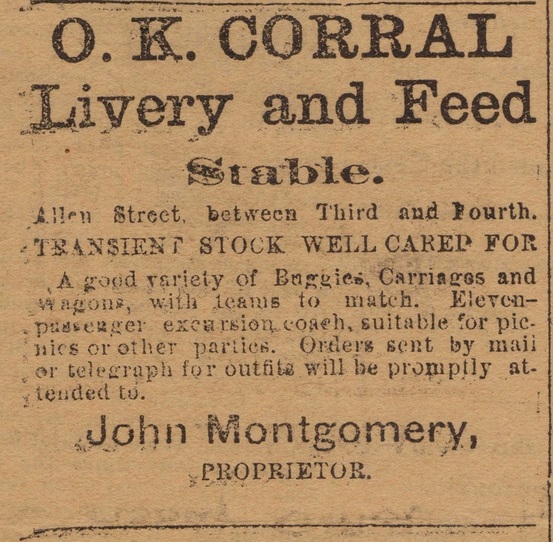 This ad is for the O.K. Corral, one of Tombstone long running businesses. After the departure of his early partner Benson, John Montgomery would continue this business long after Tombstone's best days had past. This ad is from the original Daily Tombstone, dated October 14th,1886.
From the collections of John D. Rose. 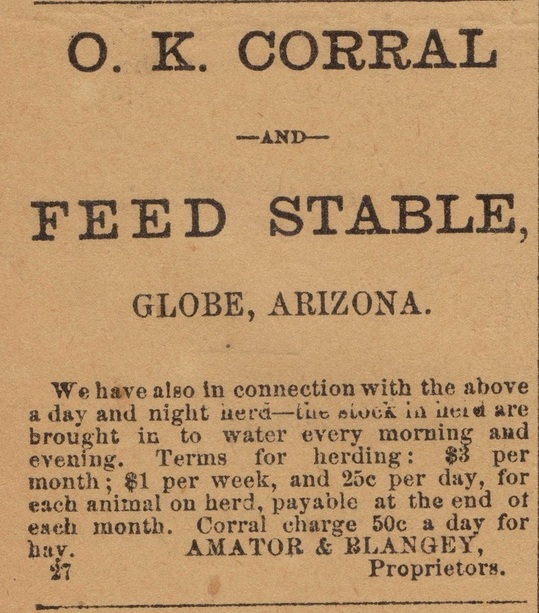 Although Tombstone's O.K. Corral has become legendary in popular culture, it was by no means the only O.K. Corral in the Arizona Territory. This ad for a separate O.K. Corral in Globe Arizona,  Nov. 8, 1879 proves this, and Globe's O.K. Corral began service before the one in Tombstone did.
From the Collections of
John D. Rose. 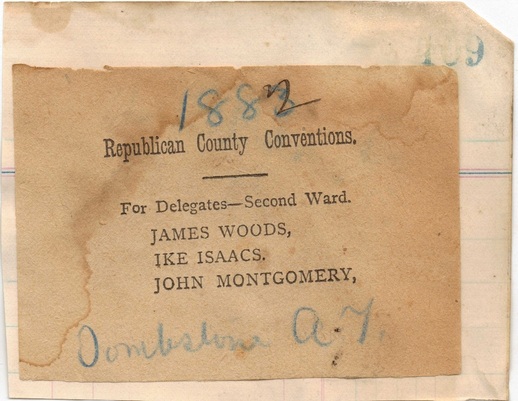 The O.K. Corral was originally owned by the partnership of Montgomery and Benson. Benson would later sell out  to Montgomery, who appears in this election notice as a Republican candidate. Along with Montgomery, Ike Isaacs appears as a candidate also, and it this document was preserved by Ike Isaacs in his personal scrapbook, which is a remarkable archive of Tombstone history and insight. Ike Isaacs personal scrapbook is from the collections of John D. Rose.

This election original election handbill shows O.K. Corral owner John Montgomery as well as William Harwood both running for office. It was between the properties of C.S. Fly and William Harwood that the gunfight actually took place. This property was not owned by the O.K. Corral at the time, which is why I refer to it as the Gunfight near the O.K. Corral-without the O.K. Corral reference few recognize the event as this misnomer has become so thoroughly known by the general public. The handwritten note on the top stating "Tombstone A.T." is in the original handwriting of Ike Isaacs, and this document also comes from his personal scrapbook which is in my collection. -John Rose 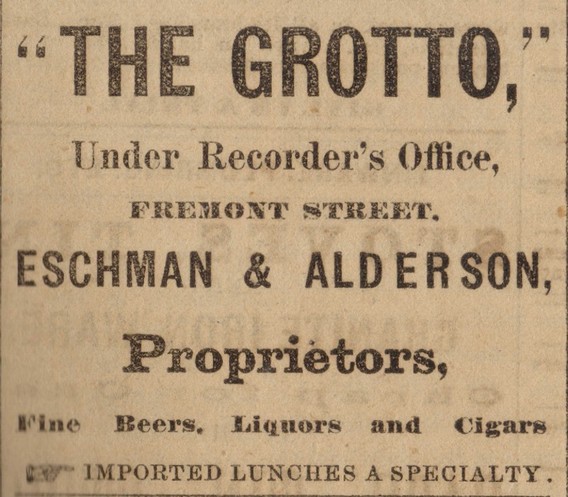 The recorder office, # 10 on the Fly photo, had a bar below it. County officials could work above the floor of the recorders office, and then drink below it. This saved them a trip down the street to imbibe.
Grotto ad from the original Tombstone Epitaph, July 8, 1881.

From the collections of
John D. Rose 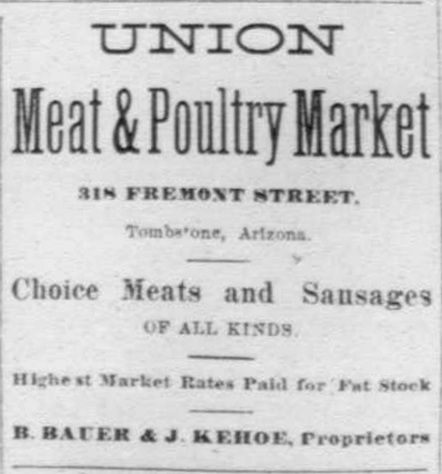 An advertisement for the Union Meat and Poultry Market, published in the Tombstone Epitaph, September 18th, 1881. It was under the awning at the front of this building that Sheriff Johnny Behan saw the Earp's approaching with Doc Holliday, as they headed to confront Ike and Billy Clanton, Frank and Tom McCluary. At this location Behan attempted to stop the Earp advance. "Hold on boys, I don't want you to go any farther." Virgil Earp responded "Johnny, I am going down there to disarm them." Moments later, the gunfire will erupt. 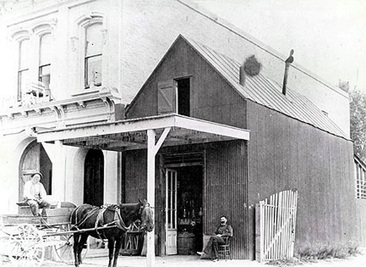 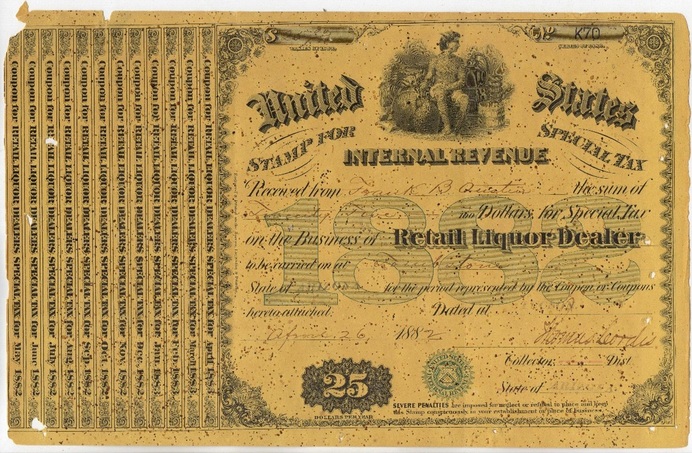 As the Earp's walked toward the Cowboys and what would turn into the gunfight near the O.K. Corral,  they passed the Papago Cash store. (see Fly photo below, entry #10) The owner was Frank Austin, to whom the above license is made out to. This is one of the businesses fairly close the scene of the shootout. Original license courtesy of the collections of John D. Rose. 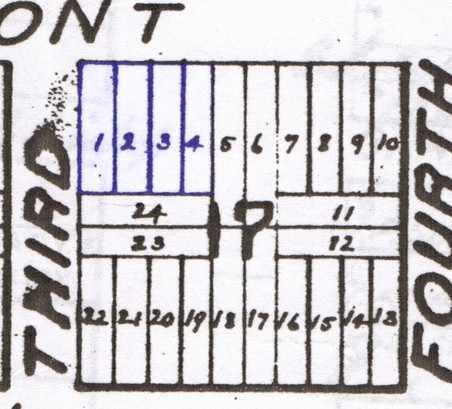 Buildings along the north side of block 17 would inadvertently become part of the story of the gunfight. For example, the lots owned by Harwood are represented on the annotated Fly photo by numbers 3a and 3, and are actually located on lots one and two of block 17.

The recently discovered 1882 Cochise County Delinquent tax book makes mention of the location of William Harwood's property on Fremont street, an area long of interest to enthusiasts of the Gunfight near the O.K. Corral. Here's the following entry regarding Harwood real estate in this very famous  part of Tombstone: "Harwood, W. A. Lots 1 and 2 Blk 17, $1000. Imps [Improvements]  $800 Household Furniture $150. Money in  Bank $1000, Horses $1000, Wagon $50. Harnesses $20." The corner of Fremont and Third Street is the location of these lots, and I have cropped out the portion of this area so that our many readers around the world can better understand this very famous part of Tombstone.-John Rose 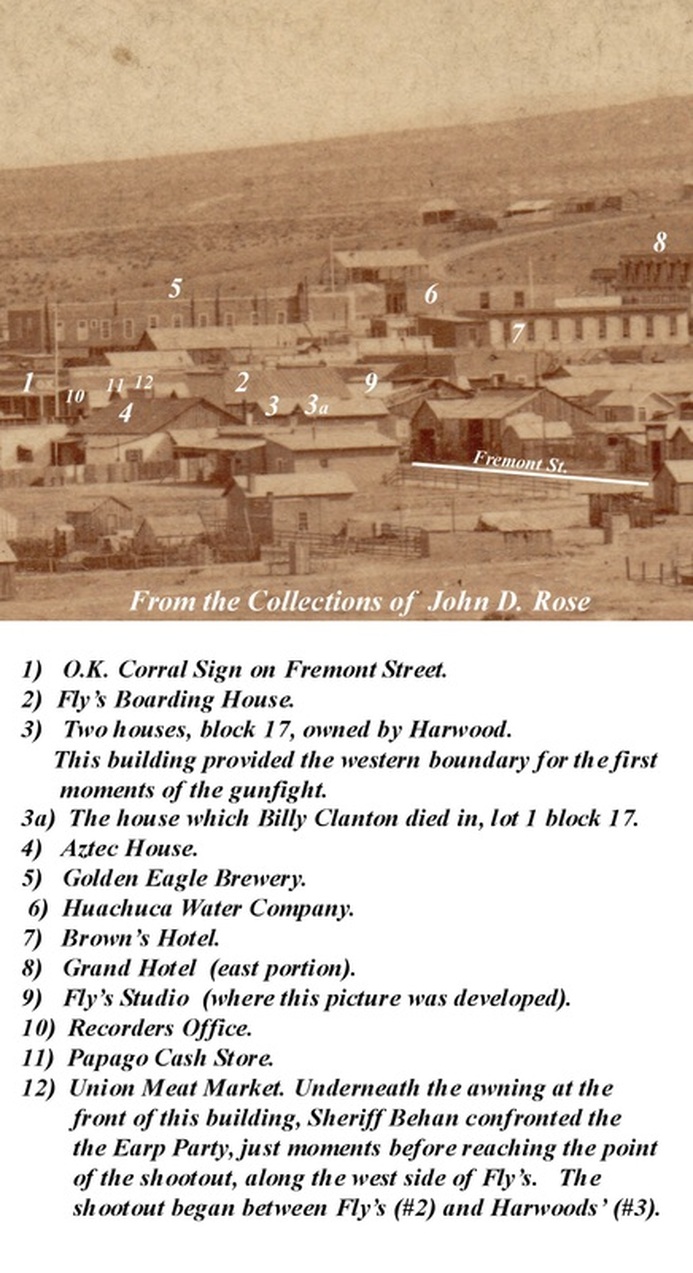 All locations as numbered on the above Fly Photo based on the research John D. Rose.
NOTED EARP RESEARCHER AND EXPERT JEFF MOREY ON Witness at the O.K. Corral: Tombstone’s Billy Allen Le Van.
I’d like to thank the many who have purchased the Le Van book, and who have offered such kind words about it. Among the many that have done so, I’d especially like to acknowledge Earp expert and researcher, Jeff Morey. I’ve long held respect for his talented and insightful research abilities, and Jeff’s decades of devotion to this pursuit have enriched all who enjoy this intriguing story. I am humbled by his praise for Witness at the O.K. Corral: Tombstone’s Billy Allen Le Van. In a response to Robin Andrews, whose remarkable research made this book possible for me to write in the first place, Mr. Morey wrote “I do want to congratulate you and John Rose on the great new Billy Allen book. It is a truly wonderful contribution!” –Jeff Morey
ROBIN ANDREWS REGARDING Witness at the O.K. Corral: Tombstone’s Billy Allen Le Van.
Robin Andrews, whose remarkable family history and stellar research made this book possible, said the following of this book. “I am very pleased to announce that Billy Allen Le Van’s biographic story has been told in its entirety. “…I have been researching the lives of Billy Allen Le Van (aka Tombstone’s Billy Allen) and his future wife, Belle Crowley (my great-great grandmother), for a long time (since 1998). Posters close to me knew after several years, that there was enough research material, mined out of the archives of Arizona on Billy Allen Le Van, to create a book. I started looking for someone willing to write that story.

“I was looking for a very good story teller. I have the attention span of a gnat, so I needed someone’s writing that could keep my attention and interest so others like me would enjoy the book as well. That was important to me. Then I felt this person needed to be an excellent historian of southern Arizona and one who could author a non-fiction old west biography and still give dimension to the characters in Billy’s story. I was asking a lot, I know. I knew much about the lives of Billy and the people in his family, even the gunfight, but not enough about other citizens, historic events, politics, organizations, businesses , and things like that, to do this story justice. I knew that my friend, John D. Rose of Sierra Vista, Arizona, met these requirements and more.

“After John Rose’s book, ‘Charleston & Millville, A.T., Hell on the San Pedro’ came out, I knew that John would qualify as an excellent choice to write Billy Allen Le Van’s biography, but would he do it? I knew he had other very important projects he was working on, but I hoped that someday in the near future that he would take on this daunting project of mine. I asked John if he would write Billy Allen Le Van’s book and John said yes. I think you too will be glad he said yes when you read this book. John has honored us with a great Tombstone story and includes many images from his own fabulous ephemeral type collections related to Tombstone.

“He wove the stories of Tombstone citizens throughout the Le Van’s life story in Arizona, making it a balanced and extremely interesting account. He was meticulous in his efforts to honor the rules of non-fiction story telling, but brought those characters to life.

"Oh, and of course, the very famous Tombstone gunfight is featured in this book as are all the players of that event, including Billy Allen as the first witness to testify at the Spicer preliminary hearing that followed. Don’t go without this book on your Arizona History/Gunfight at the O.K. Corral bookshelf. Trust me, it’s a good one.”-Robin Andrews 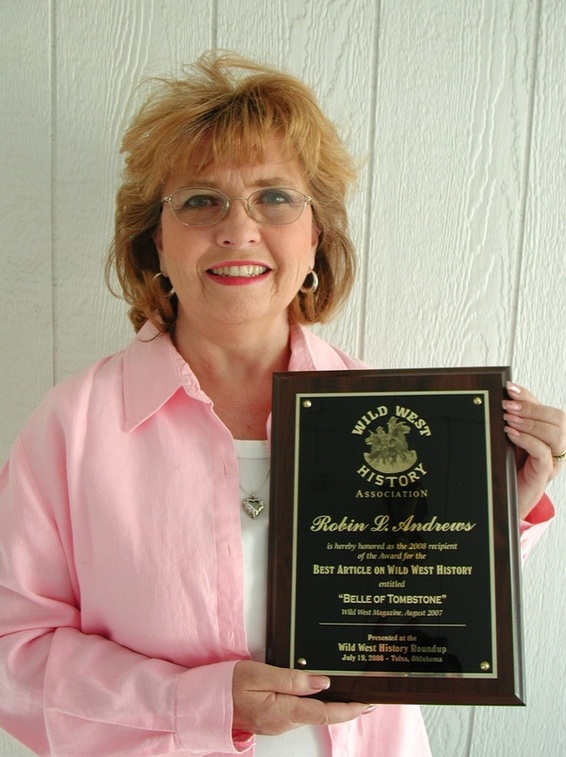 Award winning researcher and author Robin Andrews. Photo courtesy of Robin Andrews.
The above information is in part excerpted from Witness at the O.K. Corral: Tombstone’s Billy Allen Le Van, by John D. Rose. For more on this legendary story and other research breakthroughs, this book is available at https://www.createspace.com/5258114 as well as Amazon.com. The cover of this landmark book on Billy Allen Le Van, the Gunfight near the O.K. Corral, Tombstone A.T., Belle Le Van and her family history, and so much more, is viewed below. 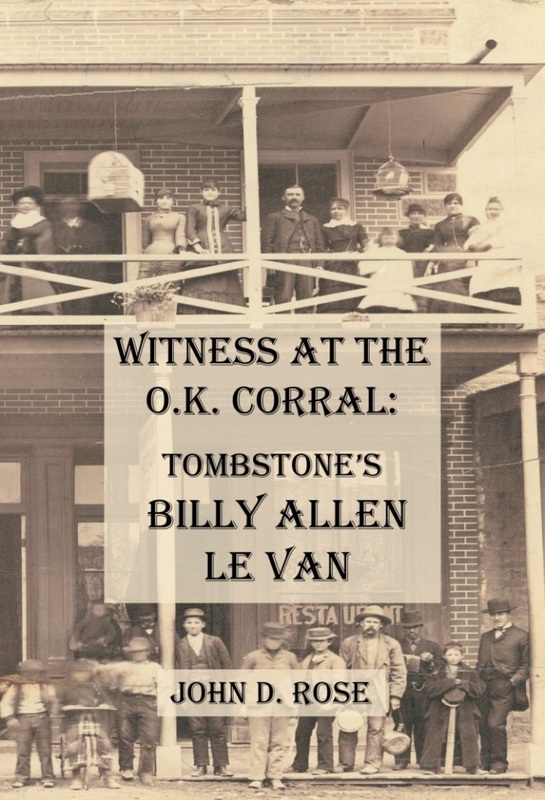