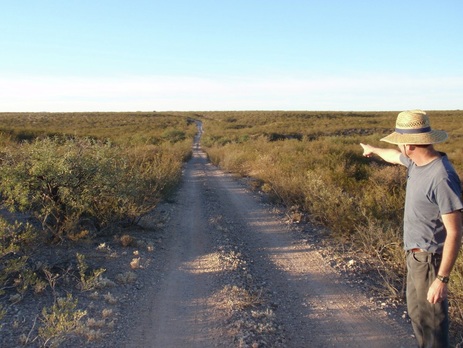 From his long experience and storied career as a Wells Fargo detective, James Hume once shared the following insight... “stage robbing is, comparatively speaking, a thing of the past. With the extension of the Railroads, closing down of many of the mines and the adoption of the money order system, there are no longer sufficient inducements for the higher grade of criminal talent to engage in the business.” Though this quote appears in his biography without a date, Hume was forced to tell a different story regarding his January 1882 trip to of all places, Tombstone, Arizona Territory.
Tombstone was still in the throws of hinterland violence and robberies, and Hume was en route to bring his expertise to bear on the situation. Traveling on the Sandy Bob Stage line from Benson to Tombstone, Hume’s journey along with eight other male passengers appeared uneventful as they traveled first from Benson to Contention, and then from Contention on toward Tombstone. So much so that Hume himself had fallen asleep as the coach made it’s way under a dim January moonlight at one hour past midnight.
That quickly changed as driver Jack Sheldon heard “halt” from one of two robbers who was now blocking his route by standing in the road as it climbed out of a large arroyo. This savvy group of travelers, hiding as much as they could, even under seat cushions in the coach, faced a less than thorough pair of bandits who in some cases, only checked one of two pockets on some of their victims. Though the Tombstone Epitaph estimates the money losses at $75.00 and the Tombstone Nugget noted $250.00, these travelers actually had a combined wealth of between $1200.00 and $1500.00 dollars, with the lion share of this amount retained by the rightful owners.
But the most embarrassing irony was suffered by Hume himself. Traveling to Tombstone to help with the robbery problem, he himself was a victim of property loss. Of  the pistols stolen in the robbery two of the fancy ones belonged to Hume himself. After taking what was described as “fine pistol” from the passenger who was riding on the boot with the driver, one of the robbers noted that this was what “he needed in his business.” Hume famously summed up Tombstone in this way… “Six thousand population. Five thousand are bad. One thousand of these are known outlaws.” This is Hume’s dry sense of humor, as even Tombstone at its very worst was far from this bad a place.
Of  Hume and his Tombstone embarrassment Fred Dodge, famous for his own Wells Fargo and adventures recalled the following: “Jim Hume was an honest man and loyal to the company and one of the best express detectives I ever knew…He made many trips into Arizona on Wells Fargo business-on one of his trips, after he left the Railroad at Benson and took the Stage for Tombstone, he had the back Seat.”
Dodge noted that Hume made conversation so as to learn the voices and mannerisms of the robbers. “He was a man who made many very ‘Dry’remarks-and he kept up quite a String of Banter with the Robbers and they were quite pleased with him. He worked to such good advantage that when the Stage finally got to Tombstone Hume got out and looked ar[r]ound and spotted me in the doorway and asked me where Wyatt Earp was. I sent for  Wyatt at once, and Jim Hume called me into the back Room where Wyatt soon joined us, and Hume gave such an accurate description of the Robbers…such as Height, build, and Voice and other details that I could name the men that were in the robbery for I knew them all. And they always held out at J.B. Ayers’ Saloon, the Headquarters of all outlaws and rustlers. We told Hume about this and cautioned him not to go there, for we were af[f]raid they would kill him, and he said, ‘All right, I won’t.’”
But while Fred Dodge was planning on going after the robbers, Hume had other ideas. Dodge continued. “ Wyatt and Morgan Earp, Charlie Smith, and My Self were soon on our way, for it was a long hard ride to…the Huachuca Mountains…We reached the vicinity about 2 a.m. next morning who lived on that side.[the west side of the Huachuca’s.] We then made a Secluded dry camp and rested until[l] nearly day light. Then we proceeded to Round up these socalled homes of the Robbers and got the families out of bed-but the robbers had not returned there after the Robbery…We then determined to go the Charleston-which was back toward [in the direction of] Tombstone.”
Wyatt and Morgan Earp, Charlie Smith and Fred Dodge arrived in Charleston at J.B. Ayers saloon at 2 p.m that afternoon, only to see Hume standing in the doorway, inviting them in for a drink. Hume would leave Ayers Saloon only to return the following day, and though he was convinced that two men who were frequent visitors there were indeed robbers of his stage, he advised against arresting for overall lack of evidence. The robbery and its aftermath had both run their course. 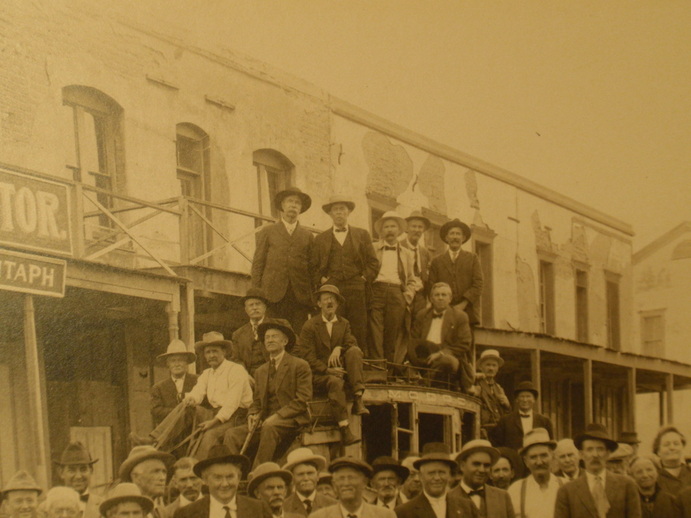 An early 20th Century photo taken on Fremont Street in Tombstone, replete with a stage from the good old days, from the collections of John D. Rose
A minor clue as to the location of this robbery site was its distance from Tombstone , which the Epitaph quotes driver Jack Sheldon was “just this side of the arroya, about half way between this city and Contention at 1 o’clock this morning.” But the Tombstone Nugget, was able to get more specific detail from driver Sheldon who said the robbery took place as “he was driving up the grade at the Big Arroyo, about six miles from here…”  The word “here” means Tombstone.
For a long time this was a site that I had wanted to find. But before I could do so,  the route of the stage road from Tombstone to Benson had to be rediscovered, and then after that discovery, find where the Tombstone to Benson road branched off to Contention. Once that work was completed over a number of years, then finding this site was comparatively easy. Without mapping the Tombstone stage road and Contention branch first, the Hume robbery site would have remained an unknown location. I am happy to share this with my many readers as this is a new find that I hope they enjoy. 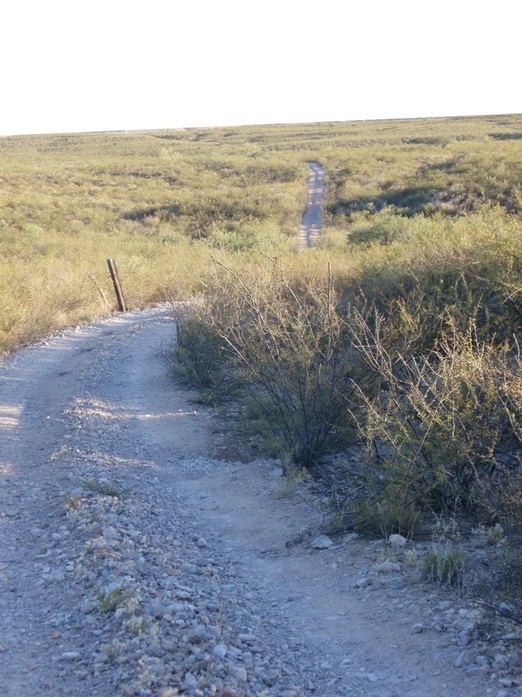 This photo is of the approach to the arroyo in which Wells Fargo detective J.B. Hume was paid a visit by highwaymen, aka, the "Knights of the Road." This view is the same for the stage coach as it approached the point of robbery, which is on the far (south) side of the arroyo, as the stage was slowly climbing out of the depression of the arroyo.
Robbers  knew well that such points on a stage road gave them the advantage, as team of horses or mules pulling a coach would already be under strain climbing out, thus the stage would have less of a chance to out run  pursuers.

Although this Stage Robbery isn't of the same importance as the Kinnear and Company event that lead to the killing of Bud Philpott, it nonetheless shows that lawlessness was still well in session in early January 1882. This robbery remains one of my favorites as the robbers, aka,  the "Knights of the Road"  were clearly disappointed at how little reward they found when robbing this particular group of travelers. "What kind of layout is this," asked one very disappointed bandit. As if to shame them for not being an enriching group to rob from he added in disgust, "It's the poorest crowd I ever struck."
Of greater embarrassment is that the list of robbed passengers included Wells Fargo special agent J.B. Hume, who "donated" to the robbers cause by handing over two pistols, while staring down the business end of a shotgun. That Hume would be robbed by the very outlaws he was tasked with helping to stop was an irony not overlooked at the time by anyone.

This photo was taken in the 1880's from Millville, which was home to Dick Gird's Mill as well as the Corbin Brother's Mill. Facing to the west, the gentle slope from Millville can be seen as it approaches the San Pedro River, which has a large Cottonwood tree visible. Note how few Cottonwood trees were really on the San Pedro River in the 1880's, proof positive that repeated claims of the dominance of Cottonwood's along the San Pedro is simply false, agenda based information.
Somewhere in all of these buildings pictured in Charleston is J.B. Ayars' Saloon in which Fred Dodge, Wyatt and Morgan Earp, and Charlie Smith traveled to after an unsuccessful trip to the Huachuca Mountains searching for Humes robbers. The Huachuca Mountains are visible on the far western horizon of the photo. The eastern slope (which the photo shows in the distance) now plays host to the growing City Sierra Vista which is my hometown,(Sierra Vista was incorporated in 1956) and at the base of the Huachucas remains the active and very historic site of Fort Huachuca,  well known for its role in Geronimo's final surrender, and its current key roles in our nations defense.
The smelter on the right is from Dick Gird's Mill. Note the two men standing near its base. At the left of the image the rooftop of Gird's home/office is also visible. I have cropped this image from the original in my collection. This shows Charleston still in its prime, as today it is in ruins. An even smaller amount of photos and documents have survived from Charleston as opposed to Tombstone. -John Rose 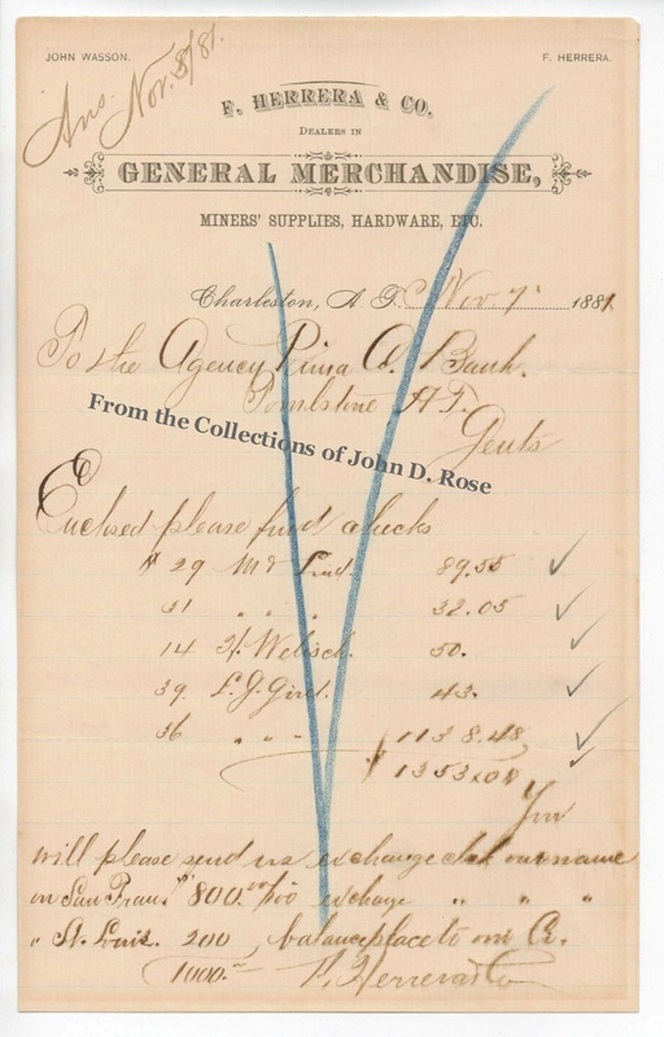 Dated two months before the Hume robbery, this billhead is from Fred Herrera, a key member of the Tombstone Stock Growers association, and active in Charleston business as was saloon keeper J.B. Ayars, who catered to a different clientele. 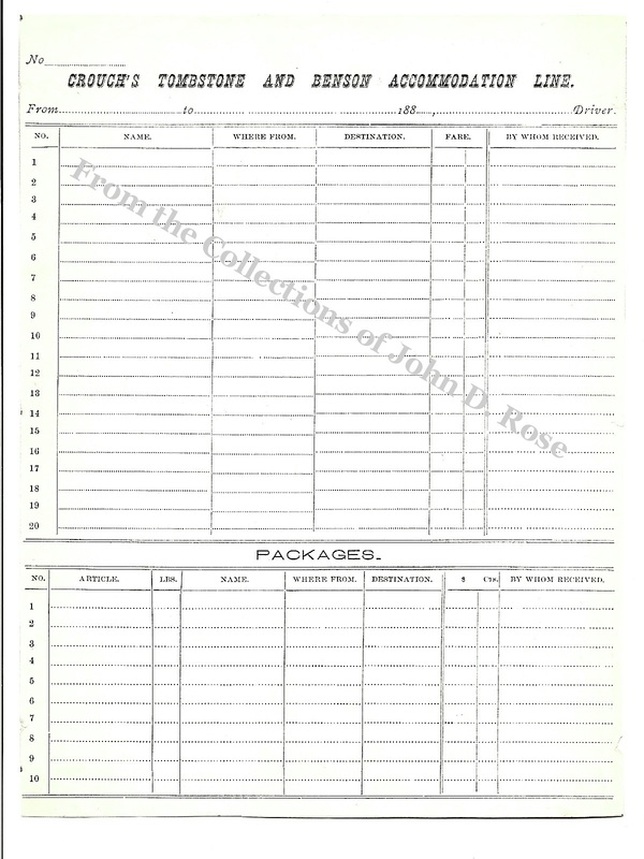 This is the way bill from Sandy Bob Crouch's  Stage line, which is the one J.B. Hume was traveling on when he was robbed of his pistols.
Original way bill from the Collections of John D. Rose. 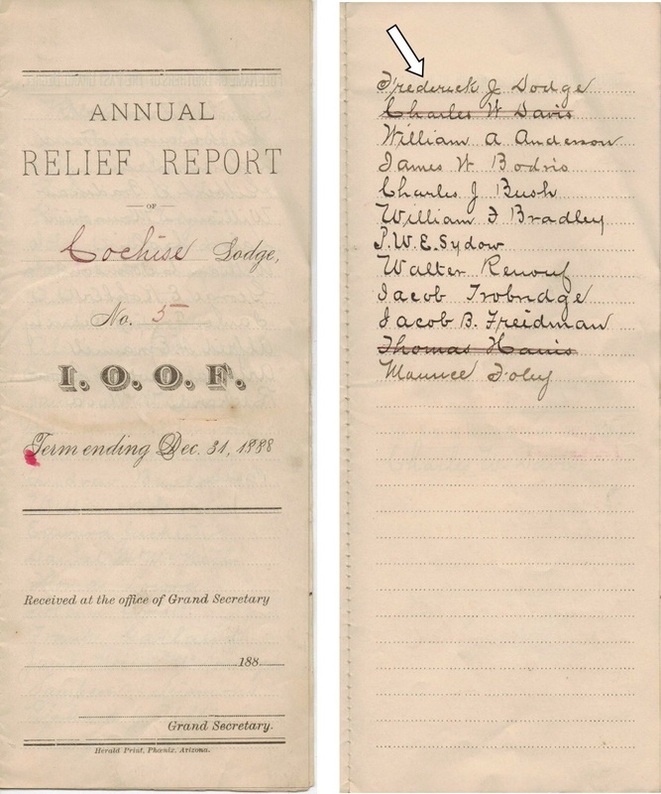 The I.O.O.F., aka, Independent Order of Odd fellows, was a membership organization which guaranteed its members paid burial if they died, and nursing care for those who all but died. Here Fred Dodge is listed as one of the members. It's interesting to note that the second cemetery in Tombstone was designed with burial plots segregated based mainly on membership in this and other like organizations. Surprisingly, given his lengthy stay in Tombstone, it's curious that documents related to Fred Dodge's time in Tombstone are not plentiful.
From the Collections of John D. Rose 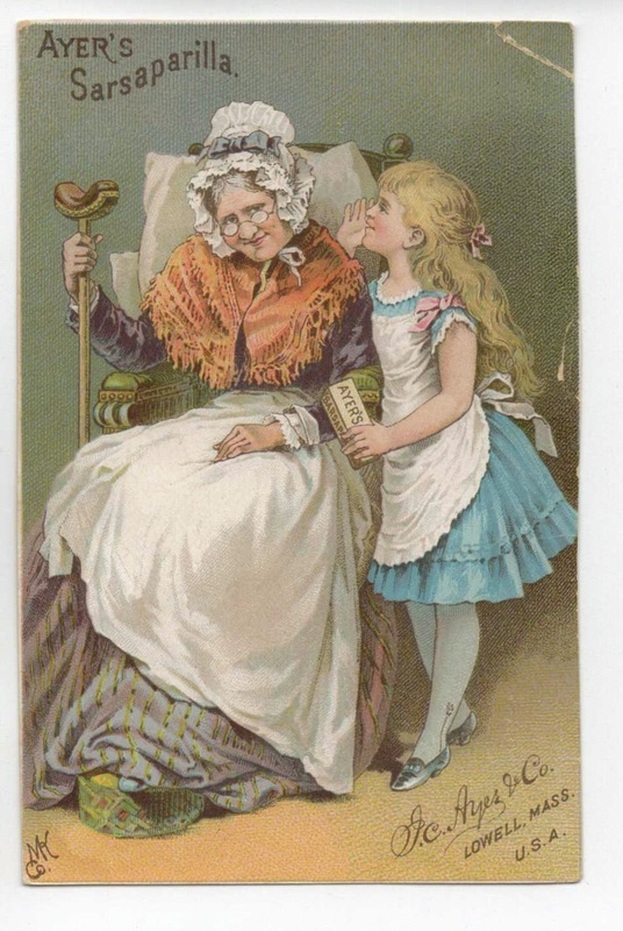 When referring to Charleston Saloon Keeper J.B. Ayars, Fred Dodge, as published in "Under Cover for Wells Fargo" spells Ayars' name in the following way: Ayers. But the Saloon Token which Ayars himself gave out in his Saloon spelled his name with two a's, not one, as follows: Ayars. This is also how Ayars' name was spelled in the 1882 Great Register. This  misspelling on the part of Fred Dodge causes me to speculate that he may have confused the spelling with "Ayers Sasprilla", a well sweetened and tasty version of snake oil, making claims of great health benefits for all those who believed in it and thirsted for it.
As recently as 1989, the Crystal Palace in Tombstone Arizona still served Sasparilla on tap, telling patrons at the time that they were the only place on earth still doing so, as such was their claim at the time.  This trade card for Ayers Sasparilla gives the reader at least one possible explanation over this very minor spelling discrepancy 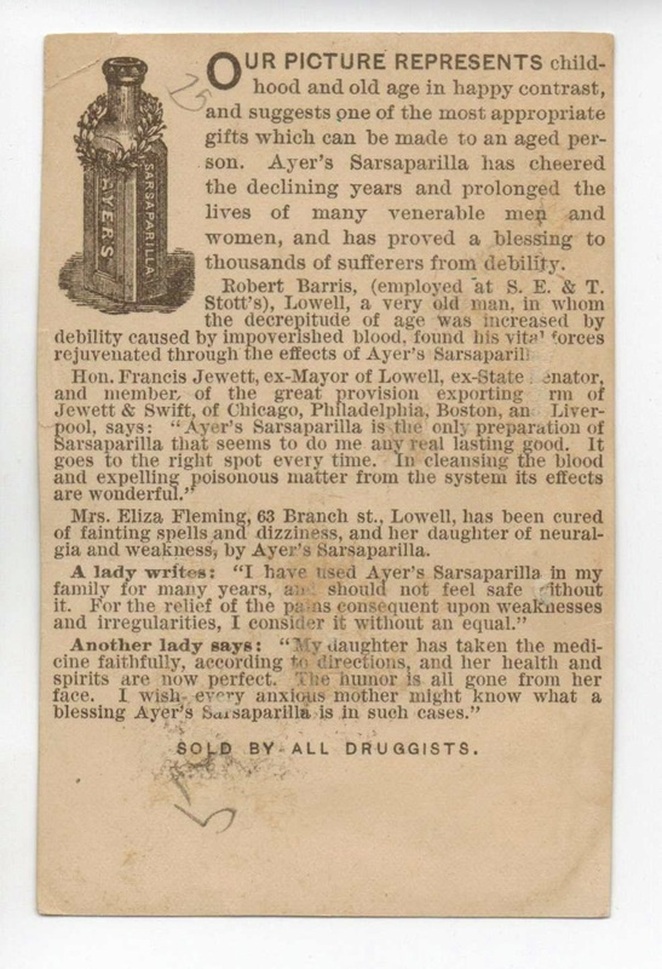 This is verso of the Ayer's Sasparilla Trade Card, complete with testimonials and implied promises.
Click book cover below to order a copy. 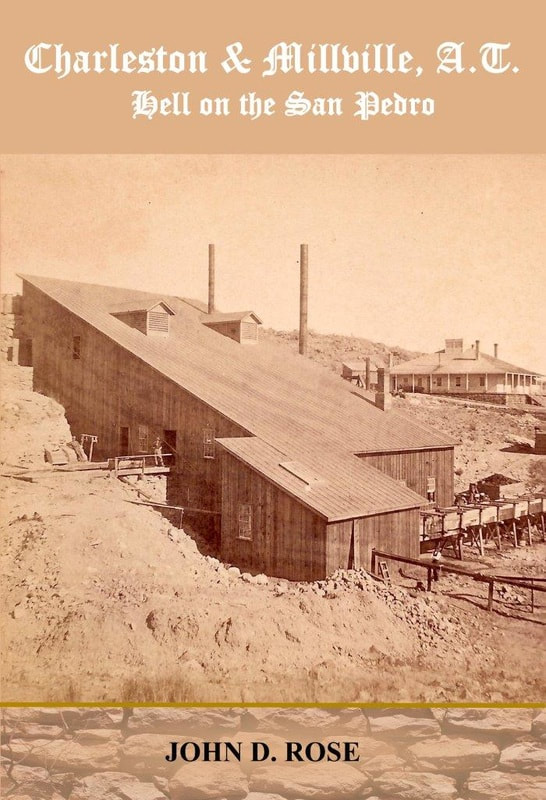