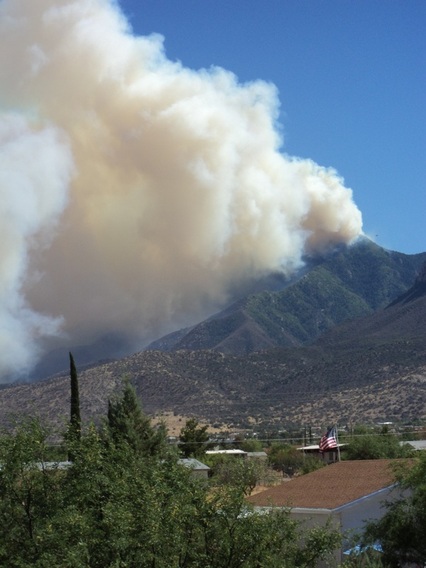 As I write to you this evening, a fire is raging but  a few miles south of my home, near Sierra Vista Arizona.  My family I and  have  spent much of today packing in case my home gets destroyed. But I have no doubt that it did not have to come to this.
I have lived in the Sierra Vista Arizona area since 1966. I have seen summer fires on our beloved Huachuca Mountains many, many times. I have seen fires far greater in scope than this, and they have never been allowed to travel to the valley floor to the degree that this one has. I'm not the only person in this area who has noticed this very odd approach to fighting this fire. I am reliably informed that on Monday morning, fire fighters were leaving the area of the fire, only to be brought back later when things worsened. The prior strategy seemed to allow the fire to burn atop ridge lines and nearby areas, but not allow it to come down to the valley floor, and threaten homes to this degree.
My home has had many flights over it...helicopters and planes heading to the fire to strike at it from the air. And yet, yesterday, Wednesday, June 15, I heard no flights overhead at the break of dawn, as there should have been. At that point the fire looked like it could have been put out if a concerted effort had been made, but only after the flames grew high again did the air intervention re begin in earnest, later on that critical morning.
When opportunities have presented themselves to kill this fire, they have been missed. To be clear, I think these firefighters are individuals of a truly heroic nature, risking their lives to save the homes of people they don't even know. They deserve, as do we, better management of this fire. On channel 4 news in Tucson, an official was asked how this fire got this far. He told of the Arizona heat, the rough terrain in the mountains, the dry conditions. Does he expect us not to notice that this is part of the very definition of the Arizona desert?  And this is a surprise to him? Coping with those conditions is what he's being paid to do.
Earlier firefighters faced those same issues...why is it they were able to keep even larger fires up in the mountains better than the current managers are? The management of this fire is wasting time playing defense, playing catch up. Homes have been lost because the management of this fire have been flat footed and lethargic.
Why were the air attacks not begun at sun rise on Wednesday, June 15th? I hope that the Arizona Congressional delegation opens an official inquiry into this. If not out of respect for those who have already lost their homes, but also out of the reality that changes and consequences are due those in management who squandered opportunities.
We also have a  problem with official information. I called the Cochise County Sheriff's office this afternoon, and asked them if my home was now on the evacuation list. I told them where I live. They told me that they were evacuating from highway 92 to Ramsey road. I pointed out that these roads do not run parallel to each other, they intersect. The Sheriff's office employee just kept saying the same thing over and over again. In desperation I suggested that she have a look at a map of this area, so that she could better tell home owners if the Sheriff's office wanted or to evacuate or not.
I plan to continue to do more projects for the WyattEarpExplorers website, as I greatly enjoy sharing history with those who love it as I do, including so many that I've never met. I want to thank my readers all over the world and in the U.S. for their remarkable and continually growing support. If my home is lost, please understand that it will be a while before I can resume this work, but it will resume.
John Rose 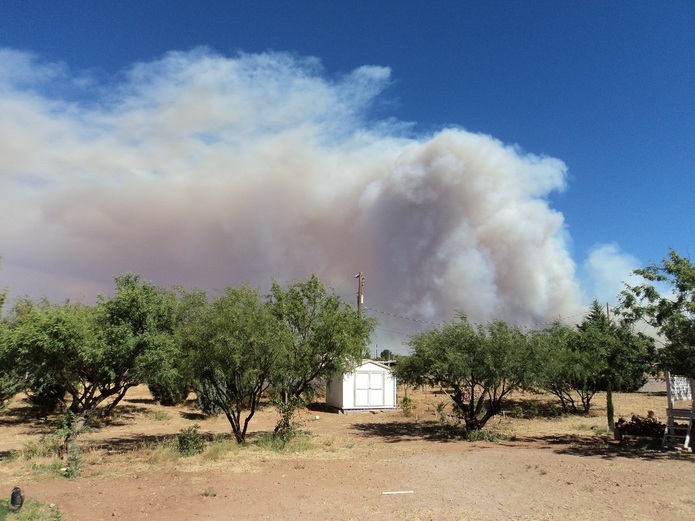 This is the view from my yard looking south toward the Monument fire. Photo by John Rose.

Back to Home Page